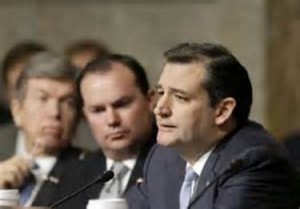 The rare weekend session drew complaints from Democrats and Republicans alike, prompting Cruz to apologize this afternoon to his colleagues for causing any “personal hardship” as a result of the weekend work. He didn’t apologize for pushing for a vote, however.

Asked about Jeb Bush’s entrance into the 2016 presidential race, Cruz offered tepid praise. He said voters were looking for a candidate who would stand up and lead.

“The biggest divide we’ve got in this country politically, is not between Democrats and Republicans, it is between career politicians in Washington in both parties and the American people,” Cruz said. “I’m not trying to play the Washington rules, I’m trying to change the rules and make elected officials, myself included, accountable to the people who elected us.”

Liberals Will Get Us All Killed

By Alan Caruba  The news from Sydney, Australia was of another incident in which a lone Islamic fascist took civilians...