MAN Haron Monis couldn’t have done more to make the deaf hear that the terror he unleashed in Sydney was in the name of Islam. 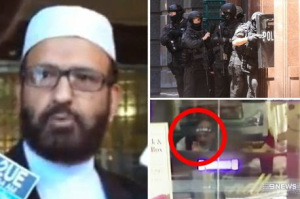 As he walked into the Lindt coffee shop with his shotgun on Monday he wore a headband bearing the war cry: “We are ready to sacrifice for you, O Muhammad.”

The Iranian-born cleric had already fought for Islam by sending jeering letters to the families of Australian soldiers killed in Afghanistan.

And in that coffee shop on Monday he conscripted his terrified hostages at gunpoint into his personal jihad.

He ordered some to hold up against the window a black Shahada flag announcing: “There is no god but Allah; Muhammad is the Messenger of Allah.”

He made videos of three of them reciting his demands, which included ordering police to fetch him an Islamic State flag and have broadcast this explanation: “This is an attack on Australia by Islamic State.”

And then he killed two captives.

I don’t know how much more explicit Monis could have been.

And I don’t know how more wilfully deaf some people can be.

The Age, in one long online news report on the terror attack, avoided any use of the words “Islam” or “Muslim”.

ABC reporters and commentators, especially, on Radio National, babbled how this unfortunate episode had nothing to do with Islam, given Monis was clearly crazy.

Islamic groups claimed nothing in their faith licensed this ghastly attack, and Monis’s former lawyer, Manny Conditsis, summed up this deep evasion in an interview with the ABC: “Yes, he said he was of the Islam faith, but he could have been any other damaged individual that did what he did.”

Except, of course, we rarely get damaged individuals killing people in chocolate shops in the name of Buddha.

We don’t get damaged individuals beheading a British soldier in the name of Christ.

We didn’t get damaged individuals shooting a Canadian soldier guarding Canada’s cenotaph, or plotting bombings of our MCG, or trying to blow up jets with the explosives in their shoes or their underwear in the name of any faith other than Islam.

True, Monis seemed crazy. True, crazy people of all kinds kill, and do not need a faith to make them pull a trigger — as we saw at Port Arthur.

Yet are the apologists really trying to dismiss the faith of Monis as just an astonishing coincidence?

Must we always feign this surprise when a terrorist is found to be — gasp — Muslim? Surely we can finally drop this absurd game given that 21 of the 21 people jailed for terrorism offences here in the past couple of decades were Muslim, as are 19 of the 20 proscribed terrorist groups in Australia.

Surely we’re entitled to conclude that something specific to Islam seems to license violence, given we have just as many Buddhists here as Muslims, yet not one Buddhist has killed here for his faith.

Yes, Monis was not a rational man, which I suspect is true of so many other notorious Islamist killers, including Australian head-hackers Khaled Sharrouf and Mohamed Elomar, now fighting for the Islamic State.

The question is: what would Christianity have inspired a Monis to do? Preach Armageddon at some street corner?

Now ask what Islam, as interpreted by a minority of extremists, whispered in Monis’s ear.

Whisper? It shouted. As Monis’s lawyer conceded on Tuesday: “His ideology is just so strong and so powerful that it clouds his vision for common sense and objectiveness.”

The ideology Monis followed was inspired in large part by Islamic scriptures that urge believers to “kill the polytheists wherever you find them”, and exhorts: “So when you meet those who disbelieve (in battle), strike (their) necks.”

We’re told, as always, that those who take seriously such passages in the Koran and Hadith are a tiny, unrepresentative minority.

But wait. The Sydney Morning Herald reports that Monis had more than 14,000 “likes” on Facebook, and a Muslim community leader asked by counter-terrorism authorities to find the Islamic State flag Monis demanded said: “I found plenty of people who had one, but they didn’t want to give them up.”

So why this denial about Islam — and specifically about its role in this attack?

For the authorities it is about public order. They fear reprisals against Muslims, and also do not wish to alienate the overwhelming majority of peaceful Muslims here whose help they need against the radicals.

For the Left more generally, to admit the latent threat in Islam would be to question disastrous Leftist programs that have left this country more exposed to political violence — particularly our too-lax immigration programs, multiculturalism and the much-rorted “refugee” programs that let in Monis in 1996. It is also to seem unkind.

But the denial, the racism of the anti-racists, it all must end.

The elements are shocking, true. But Islam contains a strong streak of violence and intolerance of other creeds. Mass immigration from the Middle East has left us in greater danger than before. Muslim leaders were recklessly slow to help fight extremism in their doctrine and their followers, including the mad.

And by screaming “racist” rather than allowing debate, our academics, commentators and politicians deafened us to the warnings until it was too late.

In Case You Missed It:  Australia proves why socialized medicine is so dangerous
Posted in Terrorism and tagged Australia, Crime, hate crime, Islam, Jihad, Muslims, Terrorism.

ANTHONY FUREY | QMI AGENCY The natural reaction to the hostage taking in Sydney, Australia should be to brush up...