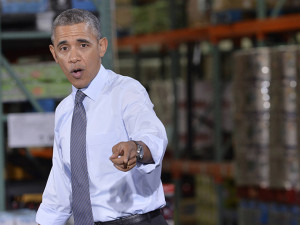 President Obama, the King of “Me,” confiscates credit for anything that even sniffs of a positive scent. Right now, that’s the smell of economic growth from privately owned and developed oil fields. His own policies have shuttered federal oil leases, selling them at a premium with crippling restrictions while extorting oil companies (most particularly BP after the Gulf spill in 2010) to pay royalties on oil left in the ground.

In one breath the president lauds the plummeting price of gas as it provides a boost to the strapped economy he engineered, and in the next he warns of his plan to veto oil transport across the center of the nation via the Keystone XL pipeline.

How many times did your parents tell you that “you can’t have it both ways?” Evidently, nobody ever made mention of that law of circumstance to Mr. Obama during his formative years. Simply put, you can’t supply the demand by closing the road to get product to the people, which is precisely what he has been trying to do with all his might and bluster. Lucky for us average citizens, entrepreneurs went around the government roadblock in their determination to give Americans, and consequently the world, what they demanded: affordable energy.

To reiterate, we have a president usurping credit for oil production success that he continues to do everything in his power to derail, including halting the Keystone pipeline with incoherent arguments. No one can claim Keystone hasn’t encountered a few hiccups as legs of it have been under construction for years, which property issues need be alleviated to benefit landowners as the pipeline plans go forward. But the radical environmental lobby claiming the project will damage eco-systems, inflate the fallacious carbon footprint, etc. are specious.

For those who still have no clue, the United States is already crisscrossed by a vast pipeline infrastructure that carries natural gas and crude oil from the production fields to refineries, ports and end-use stations—your home and mine. These pipelines have operated with minimal trouble for years, decades, in fact. And is Keystone a special case? No, even if oil sands oil must be diluted to flow. One need only look to the Alaska Pipeline for validation of how a pipeline can coexist with wildlife as its heat supplies a haven for caribou in the coldest of winters, actually helping to increase the herd numbers.

Pandering to his fractional super-green voting mob, Obama’s insistent veto threats aren’t alarming the republican-held Congress as a mandate to finish Keystone passed the House last week, and a bi-partisan preliminary vote rolled through the Senate 63-32 January 12, 2015. Congress is just shy of mirroring citizens’strong support by 65% for the pipeline that was demonstrated in a new poll.

What the president should be concerned about is the temporary tumbling price of oil that the OPEC glut is creating in an attempt to pressure U.S. producers. Then again, Mr. Obama thoroughly approves the obstruction of American enterprise, especially energy production that improves the living standards of U.S. citizens. It’s no secret that he believes America doesn’t deserve a booming economy when other ‘less fortunate’ nations are struggling to climb out of third world status. It may not take a rocket scientist to understand that our founding documents are what created the environment (pun intended, thank you very much) to build a great economy, but a Statist attorney will never grasp the concept. And in this instance, Obama, as just such a politician, will continue to impede private enterprise and applaud foreign states that undermine our homegrown prosperity.

Consistently proving that he sides with foreign interests over American, the president promotes new regulations that censor affordable domestic energy development, from curtailing coal-fired power to the newest hurdle for the natural gas industry with unreasonable and redundant methane emission standards. Redundant because the industry is already building wells that capture as much of the resource as possible because of its commercial value. However, government grows government thinking to induce protection of natural resources and the economy. What bureaucrats and most political animals don’t get is that private business has an instinct to protect resources for its, and subsequently the nation’s, survival and economic expansion.

With each day’s dawning in 2015, the new Congress is compelled to confront President Obama and his obstructionist pen that hovers prepared to slash their efforts to dial back his ruinous agenda. Civility may go by the wayside in the fight to oust what the president assumes to be his privilege, but harmony was never in Obama’s vocabulary. Discord, on the other hand, is his middle name.

The racist bigot Al Sharpton is at it again, what is truly stunning in this racial incitement is how they...