The racist bigot Al Sharpton is at it again, what is truly stunning in this racial incitement is how they list the white demographic of the Academy as if that is itself de facto proof of racism. I just can’t get my head around that type of bald-faced racism from Sharpton and his bigot supporters. 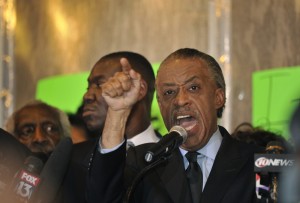 If we have learned one thing: “diversity” is  used as a anti-white racial insult. Diversity is never asked of the NBA, Delta Blues, Bollywood, Samba music, Africa, the Middle East, or anything that is non-white. It is a con game. “Diversity”the term is interchangeable with “whites are racist.”

The majority of talented basketball players are black, it’s not because someone is racist, it’s because blacks happen do better in the game that other races.  To turn it into a race argument is ludicrous, but Sharpton does that very thing about the Oscars. Sharpton calling anyone a racist is like Stalin calling Churchill a genocidal communist dictator.

The big deal on the Drudge Report was a link to the Hollywood Reporter with a complaint that no acting awards for black people at the Oscars this year showed a lack of “diversity.” Sacré bleu!   Diversity IS racism,  it’s the biggest shuck to come down the pike since, well, Al Sharpton. It divides people and turns them into objects, but that’s probably over your (meaning Al’s) head, so I’ll leave it at that.

But I will add this.  I’m shocked anybody cares who wins the Oscars anymore.  At least Al Sharpton does, or says he does.

Isn’t it ironic (or moronic, take your pick) that All Sharpton apparently thinks that a movie about a man dedicated to content of character over color of skin should be nominated for an Oscar because it is about and made by and starring people of color?

Will the Supreme Court Protect a Farmer’s Right to Grow and Sell Raisins?

On Friday the U.S. Supreme Court agreed to hear a case brought by California raisin farmers who were fined by...