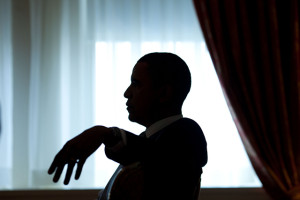 When President Obama was running for president in 2008, he quipped to a top aide that “I’m just not very good at bulls***ting” on gay marriage.

Obama’s former chief strategist David Axelrod writes in his new book that his former boss “misled” the nation when he opposed gay marriage in 2008. Axelrod goes on to detail Obama’s deceptive political posturing.

“Axelrod writes that he knew Obama was in favor of same-sex marriages during the first presidential campaign, even Obama publicly said he only supported civil unions, not full marriages. Axelrod also admits to counseling Obama to conceal that position for political reasons.”

This flashback is particularly appropriate seeing as today marks eight years to the day since Obama declared his candidacy for the White House in 2007. On that cold Illinois day, Obama promised an end to “the smallness of our politics” and “our chronic avoidance of tough decisions.” But within months of his utterance of those words, members of his own campaign team were counseling him to do just that on the subject of marriage – avoid it, and then mislead people in the same small and petty way as every other politician before him. Obama did just that throughout the ’08 campaign and throughout his first term until his vice president forced his hand in 2012.

Axelrod also detailed how Obama’s rhetorical dance about “evolving” on the issue was nonsense:

In Axelrod’s account, Obama was “fully evolved” more than five months before, telling his aides to find a way for him to speak on the issue…

Now, anyone who closely follows politics already assumed Barack Obama never really opposed gay marriage. This is mainly due to the fact that he stated as much on a 1996 questionnaire in Illinois. His opposition was always about political advantage. While that may be true, the very admission of blatantly misleading the electorate undercuts the one quality that was supposed to make Obama different that every other president. It’s quite difficult to crusade for causes like “new politics” and “hope” while simultaneously concealing your positions in typical Washington-insider style.

In Case You Missed It:  If you thought the worker shortage was bad now, just wait: Over HALF of US employers plan to push vaccine mandates, resulting in mass DEATH of U.S. workers
Posted in Freedoms and tagged CNSNews, Congress, Freedom, Governments, United Socialist States of America.

In his recent testimony before the Senate Foreign Relations Committee, Gary Haugen, President and CEO of International Justice Mission, shared...