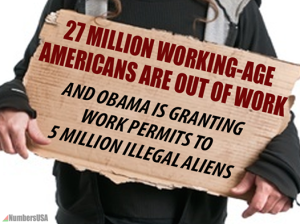 Speaking before a Town Hall Audience hosted by Telemundo, Barack Obama took the opportunity to again pander to illegal aliens while chastising Republicans for insisting that the rule of law and US Constitution be followed.

As reported, Obama muttered the following:

The obvious question would be: Mr. President, if the issue is going to be solved at some point, what is the point in trashing the rule of law and Constitution now? Why deliberately create conditions ripe for civil war when the issue will eventually be resolved by time?

The answer, of course, is that Obama has little or no concern for what is best for America and Americans, either now or in the future.

Fact is, at this point Obama is working exclusively on creating a legacy suitable to those who love Communism, and to hell with American citizens, the Constitution, and all the rest!

Another edgy, but important, question would be: Is your President Rodriguez of the future yet another illegal alien, like yourself?

And another: Is it not a pitiful concession to stereotypical bigotry to assume that the first Hispanic president would necessarily be supportive of illegal immigration?

Is there zero chance that said president, unlike you, would have a passion for the rule of law, the integrity of the Constitution, and American borders, language, and culture?

In sum, the issue is not, and should not, be the skin pigmentation of any president, but rather the commitment of that person to the principles which have made American the most successful and prosperous democracy in human history!

In Case You Missed It:  FDA "approval" of Pfizer vaccine means emergency use authorization for all other vaccines is now REVOKED... so all doctors and hospitals still administering Moderna or JJ shots are CRIMINALS
Posted in Freedoms.

After Congress tonight approved a one-week funding bill for the Department of Homeland Security just hours before a midnight deadline,...