(Conservativepapers) Obama’s terrible foreign policy is leading to the rise of radicalized Islam. First he pulled the troops out of Iraq too soon before the country was stable and foolishly backed insurgent groups in to fight against Assad in Syria, many of those insurgents have later joined ISIS. 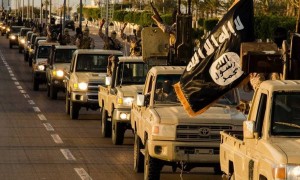 Now if you think that’s bad; well its getting much worse, Obama and NATO’s not so brilliant plan to overthrow Qaddafi is backfiring  too. The shores of Europe are now filled with refuges escaping war torn Lybia, ISIS was seen posting message around Rome saying they are present and ready to commit terrorist acts in Italy.

Obama and NATO are losing Libya too, Islamic State leaders in Syria have sent money, trainers and fighters to Libya in increasing numbers, the Islamic Terrorist group is gaining traction in Libya, major cities to take over are their next target.

The Islamic State whom followed a specific interpretation of the Qu’ran has solidified its foothold in Libya as it searches for ways to capitalize on rising popularity among Islamic terrorist groups around the world.

“ISIL” now has an operational presence in Libya, and they have aspirations to make Libya their African hub,” said one U.S. military official, using an acronym for the group. “Libya is part of their terror map now.”

The core group benefited by pointing to the mushrooming number of affiliates to show its self-styled caliphate was expanding. But the gains in North Africa mark the first expansion of the group’s reach outside the Middle East beyond rebranding efforts by militants trying to secure direct support from the Syrian-based Muslim terrorist.

Islamic State’s foothold in Libya also gives the Islamic terrorist group a new staging base to plan attacks in North Africa and across the Mediterranean Sea in Europe. Flouting their terror credentials, with Rome’s Colosseum as the backdrop, ISIS supporters have posted photos purporting to show they are already in Europe and counting down ‘till the zero hour’.

Just days ago alarming images published on Twitter have emerged as Libyan intelligence claims that the Islamic State are exploiting the Mediterranean refugee emergency to send its fighters into the heart of Europe.

While the worse of it is not just Obama loosing the Middle East to radical Islam, and perhaps Europe will see an overflow of problems including terrorist attacks too. The problems will also flow right here to the United States, this SOB Obama has put the safety of the American people last, the only thing that may wake up the average liberal loon is a lost limb from a terrorist attack, the irony when they find themselves acknowledging the conservatives were right about Islamic all along. But must it go that far before they pull their head’s out of the sand, perhaps in just enough time to have it cut off?

Obama who refuses to secure the border has literally allowed anyone including ISIS terrorist to enter the United States, either Obama is a huge failure at controlling radical Islam, he is an idiot or this is all part of his evil plan.

Because of these new worldwide problem with Islamic radicalism New York City police chief Bill Bratton is very worried about ISIS. So worried, in fact, that he’s going to assign 450 New York Police Department cops to fight terrorism that may come from the Islamic State. Yes you read that right, NEW YORK is preparing for ISIS attacks, all Obama has to say about this is that is supposedly has nothing to do with Islam.

As ISIS plans to AK-47 shopping malls, restaurants, and kill Americans.   We can expect after every terrorist attack like the one on Pamela Geller to be reminded over and over again by Obama how all these attacks have nothing to do with Islam. Are you sick of the lies, because I am!

The New York police chief said: “We are entering a new era where we cannot live in fear, but we have to live increasingly aware of our surroundings … This crazy hijacking of the Muslim religion by these fanatics, twisting it into an ideology that’s all about hate and murder and killing.”

On Monday, ISIS consolidated its takeover of the major Iraqi city of Ramadi, pushing thousands of terrified Iraqis from the...