A blogger using the pen name emilysuzanne11 has received over 4,000 reply’s to her post on why Bruce Jenner is not a Hero. On her blog https://emilysuzanne11.wordpress.com this is what she wrote:

I generally try to steer clear of controversial issues on here. Most are so deeply embedded in presuppositions that writing about them generally just generates more anger and frustration than meaningful discussion. However, I never want to shy away from speaking something that needs to be said even if I know it is not something people want to hear. So, I want to talk about Bruce Jenner.

This week, Bruce Jenner appeared on the cover of Vanity Fair, dressed as a woman and introducing himself to the world as “Caitlyn Jenner.” You see, he has decided that he is a woman and that by saying it and probably some very extensive surgery, he can make it so. In today’s world, we think gender is something we get to choose, like our career path or our clothes. So, people across the nation have lauded him as a hero. Certainly, this is the current opinion of the masses, but I have to say it. The emperor has no clothes and Bruce Jenner is not a woman.

You can tell me that there is a difference between gender and sex, that Bruce was born with a male body and a female soul, but I would ask where did he get this soul? If there is no God, we are all nothing more than raw matter, we have no souls. If, however, we do have souls, there must be something more than the material. There must be something spiritual and if there is something spiritual, there must be a God who gave us these spirits, but if there is a God, would He make the mistake of putting a female soul in a male body? How can we know? We can know by what He tells us in His word. “Male and female he created them” (Genesis 1:27) and He does not make mistakes, but does everything perfectly with love and wisdom.

We seem to want to erase the idea of gender and reinforce it all at once. We don’t want to have to conform to gender stereotypes. We don’t want to be put into categories and yet we want to be able to transfer ourselves by self-declaration from one category to another. We are so in love with our rebellion against God that we cannot see the absurdity and inconsistency of it all.

You may scoff at me. You may call me close-minded because I have allowed my religious beliefs to (gasp!) affect my judgments of propositions such as “Bruce Jenner is a woman trapped in a man’s body.” But if being open-minded means unquestioningly accepting anything and everything because it is progressive or popular, then I want no part of it. If you think I view the world from a Christian perspective and reject things that, based on that world view and common sense, are absurd, I will unabashedly and unapologetically agree.

If you don’t see things from the same Christian world view that I do, we probably do not agree and that is no surprise, but I must insist on one thing.  Bruce Jenner is not a hero.  A hero is someone who has done something brave or noble, who has sacrificed for others.  Bruce Jenner has done none of these things.  He is a man who has posed in women’s clothing on the cover of a magazine, garnering excessive media attention.  What’s more he has waited to do so until the optimum moment when he was most sure to receive praise and acceptance.  Heroes risk much and gain little.  Bruce Jenner has risked little and gained much. I am sure there are many people out there who do things to deserve the title of “hero,” but Bruce Jenner is not one of them.  He is not a hero and he is not a woman.  He is what we all are: lost, sinful, and desperately in need of Jesus. I pray he finds Him.

A few days ago I wrote a post about Bruce Jenner My main point was that I don’t think this man is a hero. It has received over 2.5 million views and I have received some 4,000+ comments, many of them accusing me of being a hateful, judgmental, idiot………… 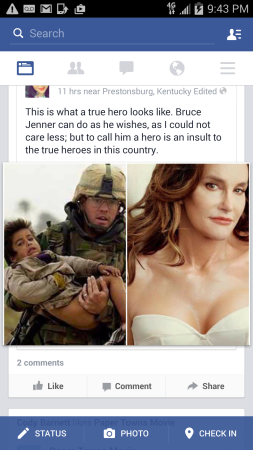 But what if jihadists represent the true Islam?

It doesn't matter if the majority of Muslims are peaceful if the ideology is not. Almost all the media and...