Before Donald Trump ran for president, few people had heard of the Stolen Lives Quilt made in remembrance of Americans killed by illegal aliens. But on Friday, July 10, families of the victims appeared with Trump to talk about the illegal alien crime wave in America and to criticize the news media for not reporting accurately and completely about what is happening in America.

The entire news conference has now been posted online, providing information about the problem that has been denied to the American people for many years.

Operating under the banner statement, “All crimes committed by illegal aliens were preventable,” the National Campaign to Remember Victims Killed by Illegal Aliens notes that “every state is a ‘border state,’” because the illegals have penetrated the United States as a whole. They argue that “Pro-amnesty special interests have spent millions on spreading the lie that the legalization of undocumented aliens is somehow good for America and American families.”

Those special interests include the Big Media corporations and those who work for them.

Trump’s remarks about criminal aliens leaving Mexico for the U.S. were made out by the media to be extreme and controversial until, a few days later, an illegal alien from Mexico was arrested for the shooting death of 32-year-old Kathryn Steinle on a San Francisco pier.

All of a sudden, because the murder was so shocking that it had to be covered, the American people could see for themselves that Trump was right.

But it is actually an old story that is well known to the families of victims of illegal aliens.

The Stolen Lives Quilt, displayed at the Trump news conference, is a collection of three-foot x six-foot banners showing the names and faces of many victims of illegals. It is a project of the Remembrance Project, which, together with the group AmericaFirstLatinos, are now strongly backing Trump’s tough talk about the illegal alien problem.

Maria Espinoza, national director of the Remembrance Project, is the daughter of an immigrant father, who legally immigrated to the U.S. from Mexico in the 1950s.

She warned in 2013 that the so-called “Gang of Eight” Senate immigration plan was an “extremely dangerous bill” whose authors “worked hand-in-hand with rich businessmen and amnesty advocates while never once considering the rights of the victims of illegal alien violence.”

The so-called “Gang of Eight” consisted of:

But the families of the victims are determined to have their say.

Brenda Sparks, whose son was killed by an illegal alien, said at the Trump news conference that the press runs sob stories about illegals but ignores the victims. “Where is the fair and balanced reporting?” she asked.

Lupe Moreno, whose 13-year-old nephew Ruben Morfin was gunned down by an illegal alien, accused the media of ignoring the problem of illegal alien violence. “I blame the American press not only for Ruben’s death but for all of these deaths, and the deaths every day,” she said. “Our children are dying every day. They’re being raped. They’re being brutalized.”

Don Rosenberg’s 25-year-old son Drew was also killed by an illegal alien. Don Rosenberg now authors the blog,  “How a Liberal Became an Enforcement Advocate: My Story.” He said at the Trump news conference that most newspapers don’t even disclose the immigration status of aliens when they kill people on the streets of America.

This complaint is valid. Since 2005, AIM has been drawing attention to the failure of the media to label criminals being apprehended for serious crimes such as rape as illegal aliens. We noted one case involving an illegal alien who came to the U.S. to commit a series of crimes, especially against women, and didn’t even bother to find a job. We commented that such stories counter the prevailing notion that illegal aliens are coming here just to work.

However, there is no doubt that cheap labor is one objective of the big companies which favor amnesty.

We documented in 2013 how various Big Media companies were lobbying for passage of the “Gang of Eight” bill. 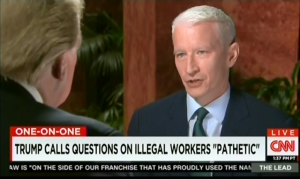 Not surprisingly, Murdoch has now attacked Trump for focusing public attention on the illegal alien problem. But as Brandon Darby of Breitbart has noted, Trump’s critics are confusing legal and illegal immigrants and misleading the public about illegal alien crime statistics. That goes for Murdoch as well.

While Murdoch’s attack on Trump is getting media attention, less well known is the fact that the head of the parent company of Fox News is a “leader” of the Partnership for a New Economy, a major corporate group lobbying for amnesty for illegals.

One demand from the corporate bosses is for the federal government to raise the cap for H-1B visas for high-skilled workers. Republican Senator Ted Cruz of Texas, a presidential candidate, hadpresented an amendment to the Gang of Eight immigration bill in 2013 that would have increased H-1B visas by 500 percent, from 65,000 to 325,000. The imported workers would have taken American jobs in the fields of science, technology, engineering, and mathematics.

While major corporations benefit from cheap labor, so do the elite journalists working for the Big Media.

AIM covered a 2003 conference sponsored by the Center for Immigration Studies, where analyst Michael Lind commented that journalists do not oppose illegal immigration because they benefit from it. Lind said journalists belong to an affluent class in America that employs immigrant maids, nannies and gardeners. “People like me are the great beneficiaries of this,” he said.

Illegal Alien Crime and Violence by the Numbers: We’re All Victims

At first glance, the statistics are jolting. According to the United Nations, 97 percent of the illegal immigrants who enter...