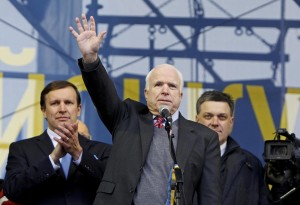 The list of nations around the globe that have collapsing economies just continues to grow.  In recent weeks I have written about the ongoing saga in Greece, the stock market crash in China, the debt crisis in Puerto Rico and the economic meltdown in South America.  But there are more economic flashpoints that I have not even addressed yet.  For example, did you know that a full-blown economic collapse is happening in Iraq right now?  And did you know that the economy of Ukraine is contracting rapidly and that it cannot pay its debts?  Back in 2008, the financial crisis was primarily centered on the United States, but this time around it is turning out to be a truly global phenomenon.

When the U.S. “liberated” Iraq, the future for that nation was supposed to be incredibly bright.  But instead, things have just gone from bad to worse.  This has especially been true since we pulled our troops out and allowed ISIS to run buck wild.  At this point unemployment in Iraq is at Great Depression levels, the economy is steadily contracting and government debt is spiraling wildly out of control…

But Iraq’s oil industry, and the government’s budget, is beingsqueezed by low oil prices. As a result, the nation’s finances are being hit hard: the market price is now half that needed to break even, expanding the budget deficit, forecast to return to balance until the rise of IS, to a projected 9% of GDP.

In the past, Iraq’s leaders approved budgets without seriously taking into account a drop in the price of oil. Now the severe revenue shortfall is forcing leaders to cut back on new investments. Russia’s Lukoil, Royal Dutch Shell, and Italy’s ENI are also cutting back, eyeing neighbouring Iran’s pending economic opening as a safer investment.

Despite improving its finances after the US troop withdrawal, the drop in oil prices and the rising costs of battling IS have pushed Iraq’s economy into a state of near-crisis. According to the IMF, the nation’s GDP shrank by 2.7% in 2014 andunemployment is estimated to be over 25%.

Things are even worse in another nation that was recently “liberated”.  The new U.S.-friendly government in Ukraine was supposed to make things much better for average Ukrainians, but instead the economy is absolutely imploding…

The country’s GDP contracted by 6.8 percent last year, and is forecast to shrink by another 9 percent this year — a total loss of roughly 16 percent over two years.

Just like in much of southern Europe, the banks are absolutely overloaded with bad loans and the entire banking system is on the verge of total collapse.  The following comes from a CNN article that was posted earlier this year…

Ukraine’s banking sector is one of the weakest parts of the economy. The key interest rates are the highest in 15 years, and experts estimate bad loans make up between one third and one half of all banking assets.

Over 40 banks have been declared bankrupt since the war began, with the country’s fourth largest lender, Delta Bank, going under earlier this week.

Just recently, the government of Ukraine declared that it could not pay its debts.  We didn’t hear much about this in the United States, because the Obama administration wants us to believe that their policies over there are a success.  But the truth is that Ukraine now needs a “debt restructuring deal” similar to what Greece has received in the past…

Progress between Ukraine and its creditors on a $19 billion restructuring may be losing momentum as a proposed high-level meeting was canceled amid further disagreements over terms.

Ukraine’s $2.6 billion of 2017 notes fell the most in a month after a person familiar with negotiations said a new offer put forward by Ukraine this week would be unacceptable to bondholders. Later on Wednesday, Ukraine’s Finance Ministry said that a Franklin Templeton-led creditor group should prepare an improved offer for meetings next week.

Speaking of Greece, things just continue to unravel over there.  Earlier this week we witnessed the greatest one day stock market crash in Greek history, and there was more financial carnage on Wednesday.  The following comes from the Economic Policy Journal…

For a second straight day, following the reopening of the Greek stock market, there were heavy losses in Greek banking stocks, with shares across the sector once again falling by about 30 percent, the bottom of their daily limit.

Bank of Piraeus and National Bank of Greece fell the most, falling by the daily limit of 30 percent t. Alpha Bank was 29.7 percent lower and Eurobank Ergasias lost 29.6 percent.

At this point you would have to be blind to not see what is happening.

A financial crisis is not just imminent – one is already starting to erupt all over the planet.

And none of us can say that we weren’t warned.  In a recent piece, Bill Holterincluded a long list of ominous financial warnings that were issued over the past two years by either the IMF or the Bank for International Settlements…

October 2014 IMF Direct Blog — What Could Make $3.8 Trillion in global bonds go up in smoke?

***BIS June 2015 (UK Telegraph) –The world is defenceless against the next financial crisis, warns BIS

But even though a global financial crisis is already unfolding right in front of our eyes, there are people that come to my website every day and leave comments telling me that everything is going to be just fine.

What do you believe the rest of this year will bring?

In Case You Missed It:  Everywhere you look, covid "vaccines" are failing
Posted in Freedoms and tagged Eastern Europe, Economy, Revolution, Ukraine, War.

Psychopath Farrakhan is calling for 10,000 black volunteers to kill whites

(Christian Examiner) – Farrakhan whom by many is considered to be the "Black Hitler", In a sermon reminiscent of the hateful bigoted rhetoric...