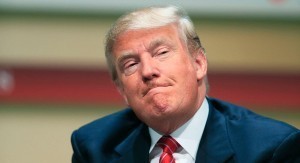 Donald Trump’s most formidable foe to date is the GOP establishment class of losers like Reince Priebus, Karl Rove, Jeb Bush, Mitt Romney and other failures who tarnish the letter R.

Undeterred, The Donald continues his campaign of blunt truth and calling out the PC nonsense promoted by liberals and moderate Republicans.

In a new poll likely to send cold chills up and down the spines of GOP establishment types. Donald Trump beats Hillary Rodham Clinton, head to head.

The poll by SurveyUSA finds that matched up directly, Trump garners 45 percent to Clinton’s 40 percent.

Trump’s surge past Clinton marks a dramatic turnaround in the polls.

Take THAT Reince Priebus, Karl Rove, and all of the other wing nuts who are not shy about saying that Trump cannot win.

Fact is, he can and will win!

In Case You Missed It:  Dukakis Warns On Polls: ‘I Had A Larger Lead In Polls Than Biden And Still Lost Big
Posted in Freedoms.

HUNGARY: The usual reason they throw away food is because it is not ‘halal’ (Islam-approved) but here they are throwing...