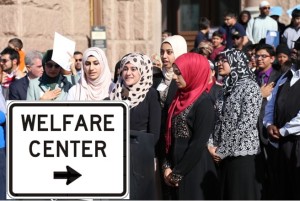 As I listened to some pundits on TV last night, I was struck by the fact that they appeared to have no idea that the Refugee Admissions Program of the UN/US State Department has been bringing in tens of thousands of refugees every year for years.

We told you the other day that the Somali refugee numbers (Somalis are virtually all Muslims) are now well in excess of 100,000. We have brought in another batch of Somalis—nearly 8,000—this year so far. So why is no one hollering about that? And, heck, they don’t even have a civil war going on there anymore.  (As if civil wars are our problem anyway!)

Now we see that Iraqis have gone way beyond that number (for Somalis) mostly since Obama has taken office.  (As you look at the numbers below, know that 2008 was a Bush Administration year).

Checking the State Department data base this is what we learned about Iraqis since January 2008.

Will there ever be an end or will this go on for decades as it has for the Somalis?

2011:  6,339 (Why the dip? The arrest of Iraqi refugee terrorists in KY ground the resettlement to a halt that year.)

Moslems:  1,753 (presumably they did not indicate sect)

I have to laugh, are the Shiites persecuting Sunnis, or vice versa.  Does it make any sense to bring in both sides of the Middle Eastern conflict?  What! to just move them and their centuries-old battle to your towns and cities?

For a handy chart of welfare goodies, go here.

Why The US Housing Crisis Is About To Get Much Worse

by Tyler Durden Over the past few months (not to mention last 7 years), the topic of America's "missing inflation"...