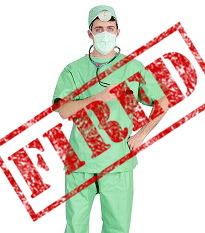 A Christian Doctor named Paul Church was fired from the hospital he worked at in Boston, for warning people — as a doctor — on the dangers of homosexuality to human health.

This doctor did nothing but tell the truth. He was acting in a responsible manner, warning of the dangers of homosexual behavior, dangers that are without question, yet the strident voice of sexual deviancy shouted him down, and through its influence on the hospital administration, stripped him of his position.

According to the report:

A Massachusetts urologist has been expelled by a Boston hospital for making statements on an internal online portal expressing concern about the health dangers of same-sex sexual activity.

Dr. Paul Church serves as a urology professor at Harvard University and also has admitting privileges at Beth Israel Deaconess Medical Center, where he has seen patients for nearly the past 30 years. He also has participated in medical missions outreaches in Mexico and Africa.

For over the past decade, Church has expressed concern to his colleagues about the hospital’s promotion of homosexual events. He has commented both via email and on the hospital’s internal portal that it is improper to promote lifestyles that are contrary to the goals of the healthcare community, and has been met with allegations that his comments constitute “discrimination and harassment” and are “offensive to BIDMC staff.”

“Life expectancy is significantly decreased as a result of HIV/AIDS, complications from the other health problems, and suicide. This alone should make it reprehensible to the medical community, who has an obligation to promote and model healthy behaviors and lifestyles,” he said.

According to reports, in 2011, after being told that he would be subjected to an investigation if he does not resign, Church received a letter from a peer review committee demanding that discontinue providing his “opinion about sexual orientation, homosexuality, or other protected status.”

Church in turn asked that he discontinue receiving the hospital’s emails promoting homosexual pride events, but when he continued to receive the notices more frequently, he again spoke out. One comment was posted in 2013, and two in 2014.

“Celebrating sexual perversions is highly inappropriate, especially in the context of a medical center that should be aware of the negative health consequences of high risk behaviors,” Church wrote in 2013. “It also ignores and dishonors the religious convictions and moral objections that many members of the hospital community share who are opposed to these behaviors.”

In September 2014, a formal investigation was launched against Church, and findings were turned over to a 25-member Medical Executive Committee for consideration. In March, the committee decided to expel Church for his “unsolicited views about homosexuality that were offensive to BIDMC Staff” and for violating the hospital’s discrimination policy.

Church appealed the expulsion, but it was upheld this month by the panel. He is now facing a final ruling from the hospital’s board of directors.

The people who stand on the side of homosexualism, having rejected truth, are void of reason, and instead cling to lies and delusion. They despise those of us who tell the plain, timeless truth about homosexuality and related behaviors like “transgenderism.” This is clearly seen in the hospital administration’s treatment of Dr. Church. Mr. Camenker’s report further states:

Over a decade ago, Dr. Church became concerned about the hospital’s aggressive promotion of and involvement in LGBT activities — including Boston’s annual “Gay Pride Week” – and its emphatic push for staff participation in them. He felt compelled to speak out.

Promoting such behavior, he said, is contrary to the higher mission of the healthcare facility to protect the public welfare and encourage healthy lifestyles. Dr. Church also reminded the administration that its staff and employees represent a diversity of moral and religious views, and many believe that homosexuality is unnatural and immoral.

The hospital did not at any time dispute the truth of his medical statements, nor did they address his other concerns.

They did not claim that Dr. Church ever discussed this with patients, or treated patients any differently if they were involved with these behaviors.

Instead Dr. Church was met with increasingly harsh efforts by the hospital administration to silence and censor him. They told him that his admonitions about homosexual behavior constituted “discrimination and harassment,” were “offensive to BIDMC staff,” and could not be tolerated.

Notice that these people did not answer Dr. Church’s irrefutable points about the dangers of homosexual behavior and the irresponsibility of the hospital’s pushing of homosexual “pride” activities. Instead, they basically stuck their fingers in their ears and shouted, “LA! LA! LA! LA! LA! LA! We can’t hear you! You’re offensive to us!” We are at a point in our nation where the major institutions have been commandeered by truth-haters. No longer will appeals to reason and right be heard.

The Russian Annexation of the Middle East

By Peter Paton The Russian President Vladimar Putin has moved swiftly to seize control of the Middle East, as the...