This invasion will be the death of the EU — and rightly so, if Europe hopes to survive. 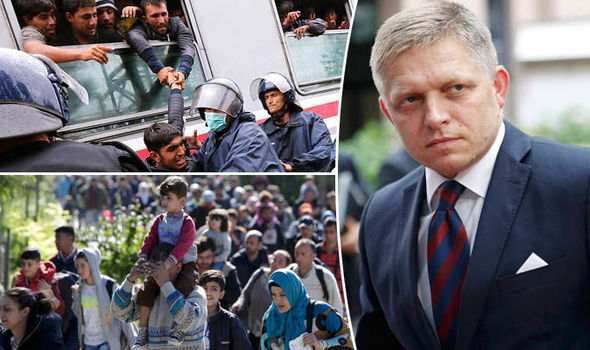 The EU has broken its own laws.

This is geopolitical chaos theory in practice. Every day the European Union (EU) changes direction on how it will cope with hundreds of thousands of migrants crossing the Mediterranean and heading for a new life in Europe.

Border fences go up and then they come down; Schengen open frontier principles must be honoured and then they are ignored; the Dublin Regulation of forced migrant repatriation is a mighty concept to uphold and then it is quietly placed in a bottom drawer.

All of the above seemingly driven from Berlin and forced on EU member nations by Angela Merkel despite their protests.

Slovakia Prime Minister Robert Fico for one has had enough. He is tired of the rancour and indecision emanating from Brussels on the migrant invasion. Fico has warned that his country will head for the exit door and no longer impose the “stupid and dangerous idea ” of a united EU if no single, common policy can be formulated to deal with the greatest mass movement of people across Europe since the end of the Second World War.

According to Germany’s Contra magazine, Fico is ready to propose “a discharge of his country from the European Union” if not freed from the binding acceptance of “so-called refugees” from the Middle East. Fico “could not accept compulsory admission quotas, since it is completely uncertain what they mean in practice.”

Last Wednesday he began that journey when Slovakia started legal action at the European Court of Justice against the EU plan to forcibly distribute a number of asylum seekers into his country.

Slovakia, the Czech Republic, Hungary and Romania had opposed the mandatory quotas for redistributing 120,000 asylum seekers from Italy and Greece but the group was outvoted at a meeting of EU interior ministers.

As Reuters reports, Fico said after the vote: “We will go in two directions: first one, we will file a charge at the court in Luxembourg… secondly, we will not implement the (decision) of the interior ministers.”

Now, conceivably, the third step will be to leave the EU altogether because Fico said the quota system would not be imposed on Slovakia “as long as he was in office”.

“We have been refusing this nonsense from the beginning, and as a sovereign country we have the right to sue,” he added.

Slovakia, a central European country of 5.4 million, has only a small migrant community. It has said Muslim refugees would be especially hard to integrate in countries with a Christian majority. The Slovak view has been echoed in neighbouring Czech Republic and Hungary as well as in Romania causing cries of “nationalism” in Brussels.

Contra magazine warns this split is emblematic of a wider fissure within the EU and the refugee crisis is “increasing the risk of a collapse of the European Union”. It cites “various coercive measures from Brussels” forcing countries to accept migrants against the wishes and votes of some EU member states as being the straw that breaks the EU camel’s back.

How Texas could deal with illegals’ birth certification

By A. Dru Kristenev There is a problem of illegal immigrants delivering their babies on the US side of the...