But no worries, terror spox Obama says no ‘specific’ terror threat to US, but calls for vigilance – he doesn’t say what for – anything except jihad terror. 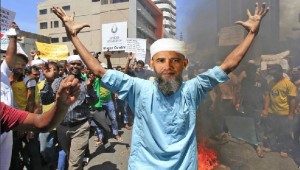 Feds can’t say whereabouts of those whose visas were revoked over terror threat, FOX News, December 19, 2015, thanks to Creeping):

The Obama administration cannot be sure of the whereabouts of thousands of foreigners in the U.S. who had their visas revoked over terror concerns and other reasons, a State Department official acknowledged Thursday.

The admission, made at a House oversight hearing examining immigrant vetting in the wake of major terror attacks, drew a sharp rebuke from the committee chairman.

“You don’t have a clue do you?” Rep. Jason Chaffetz, R-Utah, told Michele Thoren Bond, assistant secretary for the Bureau of Consular Affairs.

But Chaffetz quickly pried at that stat, pressing the witness about the present location of those individuals.

The startling admission came as members of the committee pressed administration officials on what safeguards are in place to reduce the risk from would-be extremists.

Hillary Clinton chose Minneapolis — with its growing enclave of fundamentalist Muslim refugees — to announce her plan to combat...