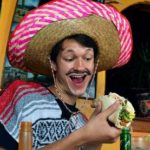 DNC uses their own words to destroy themselves. This is what they think of their supporters.

Hours before the DNC Convention convenes, this email is found within the Wikileaks email blast sent out on Friday and it comes straight from the DNC.

Please explain how the DNC referring to Hispanics as "Taco Bowl Engagement" is Russia's fault?

How do yall mexicans feel about your support for democrats being referred to as "taco bowl engagement"?? ????

@AmericanMex067 Have you seen the #DNCleak email where DNC Staffer wants to "mop up some more taco bowl engagement"? The Dems disgust me!

#DNCinPHL #DNCCORRUPT Glad I'm not a DEMOCRAT, distasteful TACO BOWL'S, shows what DEMS really think about Hispanics, nothing but a vote.

The DNC is imploding. And it’s more fun to watch than an episode of Krapdashians. Their lying and double-crossing ways are finally exposed. What else would you expect from a party that supports a pathological liar?

In Case You Missed It:  Gilead Sciences and the Gilead New World Order from HULU series Handmaid’s Tale – From Science Fiction to the Science behind COVID-19 vaccines (op-ed)
Posted in Freedoms and tagged Democrats, Mexico, Racism.

KYIV, Ukraine—Little more than two weeks ago, things were looking up for Ukraine. Fighting had tapered off in the ongoing...