When you thought things could no get any worse in Europe after four Islamic terrorist attacks in Germany in the past few days following a massive attack when an Islamist drove his commercial truck trough a crown in Nice France. 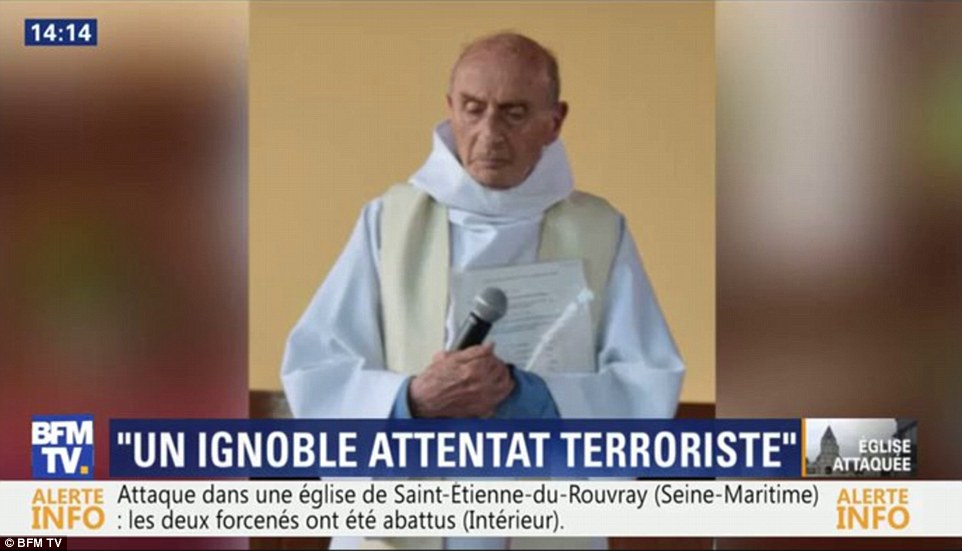 Today the unthinkable happened, something you read about only in the Islamic world. A Christian Church attacked by Orthodox Muslims beheading the priest, this in in France. Western culture and our Christian identity being under attack in our own cities.

Islamist knifemen chanting ‘Allahu Akbar’ beheaded a French priest and left a nun fighting for her life – before police shot them both dead.

The 86-year-old priest was butchered while two nuns and two parishioners were held by assailants who raided the church in Saint-Etienne-du-Rouvray near Rouen in Normandy during morning mass at 9am.

The clergyman, named as Jacques Hamel, is believed to have been beheaded during the attack while another hostage, said to be a nun, is fighting for life in hospital.

The two attackers were ‘neutralised’ by marksmen as they emerged from the building, which is now being searched for explosives. French president Francois Hollande said France is ‘at war’ with ISIS while the terror group has claimed responsibility for the killing.

There were reports the attackers shouted ‘Allahu Akbar’ as they ran out of the church while at least one of the men was dressed in Islamic clothing.

It comes as it emerged that the building was one of a number of Catholic churches on a terrorist ‘hit list’ found on a suspected ISIS extremist last April.

There are also reports that one of the attackers was a local resident who was under electronic tag surveillance having been jailed in France for trying to travel to Syria in 2015. His bail terms allowed him to be unsupervised between 8.30am and 12.30pm – the attack happened between 9am and 11.am.

The Muslim group ISIS has claimed responsibility for the attack in a statement published by its Aamaq news agency. It said the killing was carried out by ‘two soldiers of the Islamic State.’ 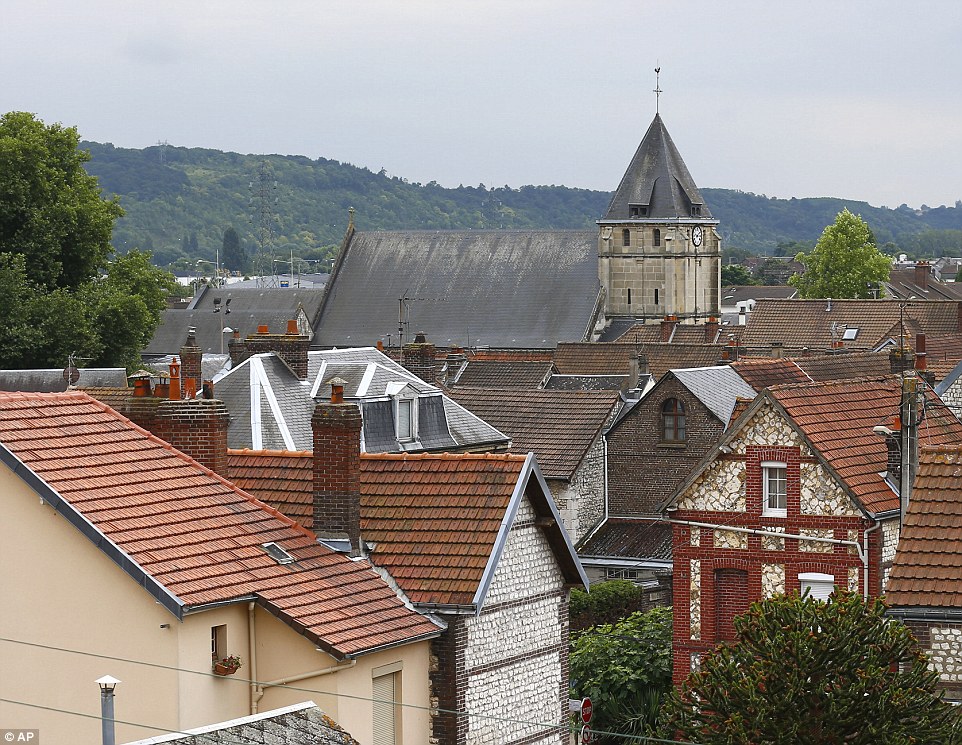 The once Tranquil city in France being destroyed with Multiculturalism and immigration from Muslims.

Pope Francis has expressed his ‘pain and horror’ at the incident with a spokesman saying the Pontiff was appalled by the ‘barbaric killing’ because it happened in a sacred place.

The Archbishop of Canterbury Justin Welby said: ‘Evil attacks the weakest, denies truth and love, is defeated through Jesus Christ. Pray for France, for victims, for their communities.’

French President Francois Hollande, visiting the scene of the attack, appealed for ‘unity’ in France, where political blame-trading has poisoned the aftermath of the Nice truck attack, the third major strike in the country in 18 months.

A spokesman for the Interior Ministry in Paris had earlier said that they had crept into the church via a back entrance during a morning service, soon after 9am. The two men seized the priest, two sisters from a local order, and two parishioners.

‘A third nun escaped and raised the alarm, and anti-terrorists officers were on the scene within minutes,’ said a source who lives locally. ‘It appears that the priest who was celebrating the service was attacked first, and had his throat cut.

This morning, security sources said one of the murderers was a convicted terrorist who was meant to be living with his parents with an electronic tag on his ankle.

The revelation – made to the French TV news channel I-Tele – will cause further outrage in a country devastated by constant security failings.

Two identities of the attackers are already known to the authorities. One, who lived close to the church, is said to have left for Syria in 2015 to try and join ISIS, but he was arrested in Turkey.
He was jailed for terrorist offences following a short trial in France, before being released on March 2 this year. Bail conditions included returning to live with his parents, wearing an electronic tag, and reporting to his local police station. Neither of the Saint-Etienne-du-Rouvray attackers have yet been named.

French security services have been regularly criticised for the way they allow known terrorists their freedom after being found guilty of crimes.

Recently, more and more evidence has been coming to light that Putin has been infiltrating our electoral process. Here is...