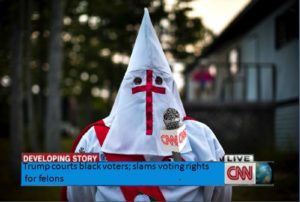 A CNN article published on Sunday by CNN’s Ashley Killough and Karl de Vries is about the Republican nominee’s recent outreach to African American voters during his campaign rally in Virginia on Saturday and his criticism of Virginia Gov. Terry McAuliffe’s plan to restore the voting rights of felons. McAuliffe, who is under FBI investigation for campaign contributions, could potentially become a felon himself.

CNN describes the plan as “a move McAuliffe says could help African-Americans who were disproportionally affected by laws that put lifetime bans on felons.”

But CNN’s article doesn’t provide statistics or the percentage of felons who are African American that would be eligible to vote in order to substantiate McAuliffe’s claim, thereby equating Trump’s appeal to African American voters as an appeal to felons.

In Case You Missed It:  DEPOPULATION TARGETS TAIWAN: Birth rates over the past year have dropped 23% in Taiwan, following blind obedience to covid vaccines
Posted in Freedoms and tagged blacks, CNN, media, Racism.

AKUMAL, Mexico–As luck would have it, my family and I have been watching that feast of American greatness called the...