They won’t let little things like votes, or facts, or what’s good for America get in their way.

That is the screech we’re about to hear emanating from the denizens of the swamp. Sure Maxine Waters and a few others have been singing this song since election night when their plans for the last nail in our coffin went down in flames. Now it’s beginning to percolate through the monotone media megaphone. And though this was predicted in this column by this author before the inauguration, it still has a jarring impact on the senses.

Back in the Dream Times when the Deep State was able to turn Watergate into a Silent Coup the precedent was set. If someone tries to overturn the moneychanger’s tables they must be destroyed. If it’s a president, even one elected for the sole purpose of adding some reality to the mirage of our functioning oligarchy which portrays itself as a dysfunctional democratic republic, they must be hounded out of office, disgraced, and discredited.

Witch hunts find witches. That’s what they do

No matter that the initial facts of the story are ludicrous: the fictional Golden Shower Dossier and the Russian hack of the DNC, which was in fact an inside job. It doesn’t matter that the very foundation of the Russian collusion theory is built on sand. Al that matters is that they now have a Special Counselor. They can’t call him a Special Prosecutor because there’s no legal foundation to appoint a Special Prosecutor, so if they call him a Special Counselor that should fool all of us out here in fly-over country.

Prosecutors always believe whoever they’re investigating is guilty and that their job is to find enough evidence to prove what they believe. Innocent until you are proven guilty, right. Anyone who has ever been unlucky enough to have be involved in a criminal trial and lived to talk about it knows how that feels in reality. It has inspired some to look at the courthouse and say, “It may say justice on the outside but there isn’t any on the inside.”

Remember the Valerie Plame investigation? Someone blew her cover as an undercover CIA operative. Before the investigation even started they knew who did it. Eventually after a few years and millions of dollars they never prosecuted anyone for the leak; instead they prosecuted Lewis “Scooter” Libby the Chief of Staff of Vice President Dick Chaney for inconsistencies in his testimony, a process crime.

These are search and destroy missions. They are looking to get as many convictions as they can to justify all of their expenses and to puff up the reputations of the scalp hunters who run them. This Special “Counselor” is one of the closest associates of James “The Leaker” Comey. He is staffing his office with Obama and Hillary supporters and we’re supposed to believe his investigation of a non-crime that never happened will produce objective results that anyone anywhere would imagine are justice?

Witch hunts find witches. That’s what they do.

If anyone was interested in finding real collusion to disrupt an American election they could look into the subject of the DNC emails leaked to WikiLeaks; the proven collusionbetween the Hillary Clinton campaign and Debbie Wasserman Schultz as revealed by unindicted co-conspirator Donna Brazile. Did you ever notice that none of the principles ever denied what was in the leaked emails, they merely complained about who leaked what to whom. Why isn’t there a Special Counsel looking in to how these people stacked the cards against poor old Bernie Sanders? He said all along the election was rigged and he was right after all. Why no interest in this? It doesn’t serve to keep the swamp damp that’s why.

Our elite masters, the perpetually re-elected, the Deeps State, and the Media Cartel are setting the stage. They must drive Trump from office before he can actually drain the swamp. They must drive him out disgraced and repudiated or else the poor blind masses might figure out that we don’t need technocrats to rule us. If a professional business man is necessary to clean up the mess professional politicians have made, what do we need professional politicians for? 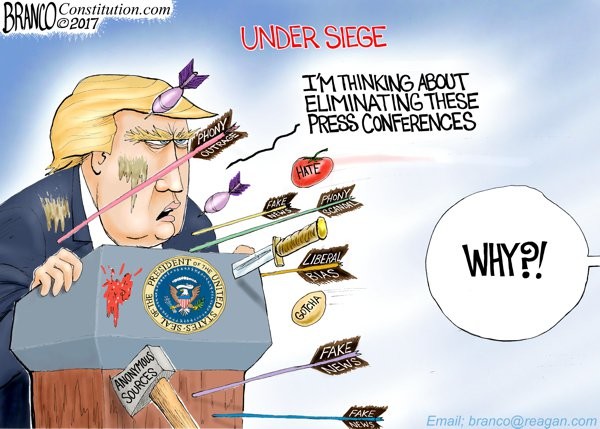 exchanged anti-Trump text messages with an FBI attorney. This transparent bias fuels questions about Mueller’s credibility and his ability to oversee an impartial investigation. It was revealed that Strzok helped push the largely unverified dossier on Trump, oversaw both the Clinton email and Russia collusion investigations, and conducted the July 2, 2016 interview with Hillary Clinton as well as the interview with Michael Flynn. Several weeks later, he was handpicked to oversee the investigation into possible collusion between the Trump campaign and Russian government. Add all this to the fact that Mueller has packed his investigating team with Clinton Supporters and there you have it, a fair and unbiased effort by the Deep State to remove President Trump from office.

They won’t let little things like votes, or facts, or what’s good for America get in their way. No, they’ll soldier on and soon we’ll hear their longed for victory chant “IMPEACH TRUMP!!!! IMPEACH TRUMP!!!!” echoing through the halls of Rome on the Potomac.

To which I say, “Impeach Mueller!”

In Case You Missed It:  FDA exposed as a criminal body parts cartel involved in routine harvesting of organs from LIVING human babies
Posted in Freedoms and tagged Impeachment.

Must-See Moments: Corruption and Bias in the FBI

The Daily Signal’s Facebook Live show “Top 10” features the top news stories of the week—many of which have gone...