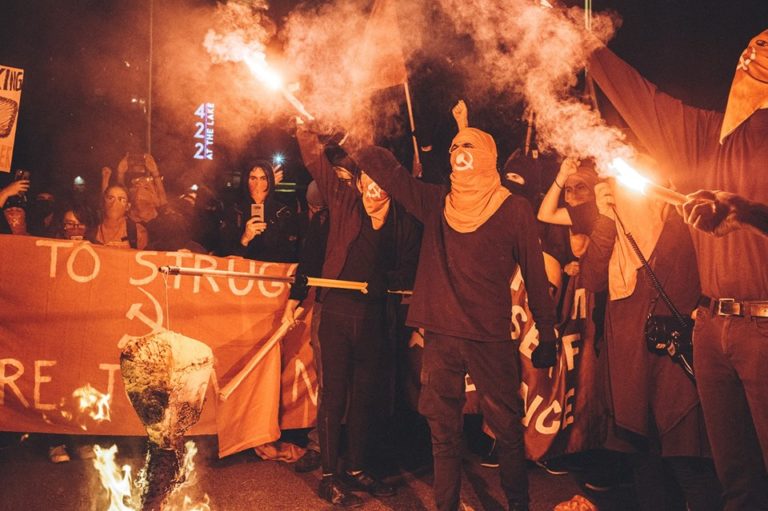 Antifa the moral equivalent of neo-Nazis is a violent terrorist groups of neo-communist fascist that call themselves anti-fascist.

Each day the violent rhetoric from antifa and other far-left extremist groups becomes more militant. In a recent blog post from the far-left site, Incendiary News, the author advocates for the “slaughter” of ICE agents and their bosses (Donald Trump). This rhetoric is fueled in part by the growing influence of Marxism on the left as well as a media industrial complex that routinely distorts, misrepresents, and sometimes even fabricates information in order to paint President Trump and his supporters as “fascists” or “white supremacists”.

Incendiary News covers “people’s struggles and news on revolutionary orgs in the US and internationally” and is run by the far-left extremist group Red Guards – Austin (RGA). They primarily focus on the work of domestic communist extremist groups but also occasionally weigh in with support for foreign terrorist organizations, like the Taliban, in some cases even celebrating the murder of U.S. soldiers.

In a recent blog post they shared on Twitter and Facebook, the author lays out his desire to see ICE agents and other government officials including the President “slaughtered”:

This author only hopes that this chapter in American history will also include the moment when revolutionaries rose up with the masses and slaughtered the fascistic Border Patrol dogs and their bosses, slaying them with revolutionary fire and justice.

He then praises the work of the violent extremist group, Red Guards (not surprising considering it is their website):

Revolutionary organizations throughout the country such as the Red Guards appear to be organizing among the immigrant masses in forming defense units, rallying around the shared slogan of “fight ICE with fire!”

This militant rhetoric is a continuation of previous statements from these cells which include open calls for “revolutionary violence” and “armed resistance”. This antifa group is just one of many violent communist cells now openly operating across the country. We have previously reported on similar cells here, here, and here.

Like many antifa groups, Red Guards cells use social media to recruit, radicalize, and mobilize other far-left extremists. Their flagship cell, Red Guards – Austin, has almost eight thousand Facebook followers. While big tech companies have been systematically censoring conservatives and right-of-center influencers, violent far-left groups are free to openly violate the Terms of Service for these platforms without any consequences.

With the information we have provided as well as our previous reports there should be zero doubt that the Red Guards constitutes a legitimate security concern. Considering that just over a year ago a far-left extremist opened fire on a GOP Congressional baseball practice game, I sincerely hope our reporting results in an investigation by the authorities. Here is how you can take just a few minutes and help us make sure that happens:

Submit a tip to the FBI. Make sure to include this article in your in you report.

Send this article to media outlets, local law enforcement agencies, and elected officials
The mission of Far Left Watch is to investigate, expose, and combat the far-left. Please share this article via Twitter, Facebook, etc. and encourage friendly media and YouTube content creators to report on this information.

Jobs that Americans won’t do: None

An immigration research think tank is debunking - again - the claim that there are some jobs Americans won't do....