All four members of hate group called ‘The Squad’ have joined Senate Minority Leader Chuck Schumer in demanding a special session of Congress to address emergency legislation on gun control.

What Congress can do about exploding white supremacist terrorism: pass gun safety laws, name WS as terrorism in statute, &more.

He needs to call the Senate back now & do so. #HR8

Sadly the GOP refuse to acknowledge that, bc their strategy relies on rallying a white supremacist base.

That‘s why the President hosts stadiums of people chanting “send her back”& targets Congress-members of color. https://t.co/8F51h46bOO

We are all horrified and ready to do what we can to end this carnage of American lives.

Your prayers aren't working. Try checking your dad on his tweets. 251 mass shootings in the U.S. in 216 days.

He incites violence every day w/ his hate agenda & racism. More people are dying b/c he fails to fight white supremacist terrorists.

They are the ones who hate America. https://t.co/dYzF2G7fEa

Black, Hispanic and Islamic gang cowards have been raping, robbing and murdering people of ALL colors for decades. We have NEVER seen a single liberal voice conduct a march on Crip/Blood local inner-city hangouts demanding THEY get out of town or come out specifically condemning those animals.

I’ve NEVER seen a single proposed piece of legislation from these same liberals even attempting to outlaw those monsters from our presence. Instead, liberal Hollywood glorifies gangster imbeciles like Snoop Dogg and others by rewarding them with lucrative movie roles and featuring them on talk shows and the entertainment industry in general.

But unless and until ALL these violent people are addressed . . . nothing is going to change. Demonizing white males alone, while giving a constant pass to the daily mass murder that takes place in liberal cities, is just not going to work. ALL violence (street gangs, antifa and white extremists) must EQUALLY be condemned at the SAME time and with the SAME determination. It is because of ALL these violent acts, that so many of us have resorted to our 2nd. Amend. right to at least try and protect ourselves from it . . . and we will continue to protect ourselves! 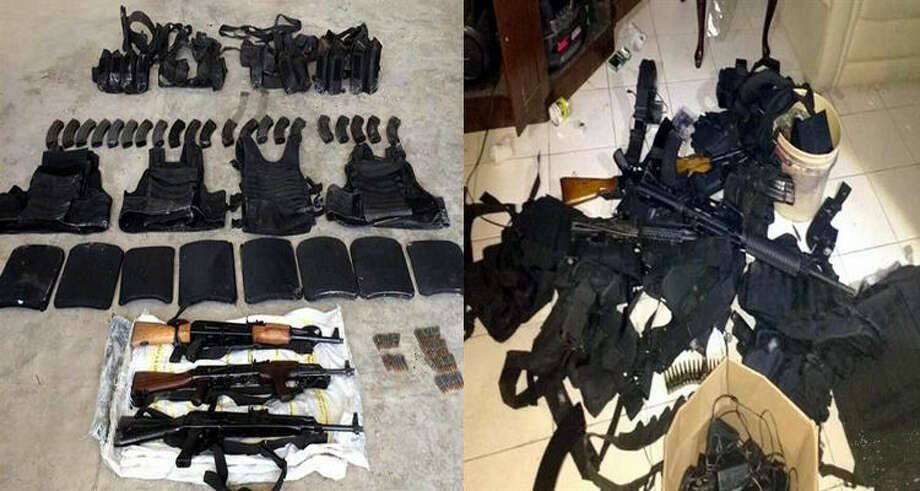 Seized multiple items from a Gulf Cartel house along the Texas-Mexico border.

Trump tried to limit Islamic terrorism by stalling immigration from countries with known Islamic terrorist, but the left wanted nothing to do with that.  Appears Islamic terror and M13 gang terror is A Okay to these four imbecilic lunatics.

These fools want wide open border and gun control?  How can that work, how can you control guns with the border wide open and armed cartel members flowing over at free will.  They cannot have it both ways.  Cartels will also start an open market of not just bringing illegal drugs across the border, make no mistake the cartels will start a black market of selling guns to Americans too. Do we see these 4 pushing for a wall at the border to control the guns that will flow through, the answer is a huge NO!

In Case You Missed It:  ACLU Responds to Musk Saying He Would Reinstate Trump’s Twitter, Say They Agree That He Shouldn’t Be Banned
Posted in Freedoms and tagged Congress, Crime, Democrats.

Why Democrats Own El Paso

By Christopher Paslay Mark Twain once said, “The difference between the almost right word and the right word is really a large matter -- ‘tis...