A Police officer was called to a scene in Victorville CA, the incident happened just after 8:30 a.m. in the 13000 block of Cabazon Court, was one of two deputy-involved shootings in Victorville on Wednesday. 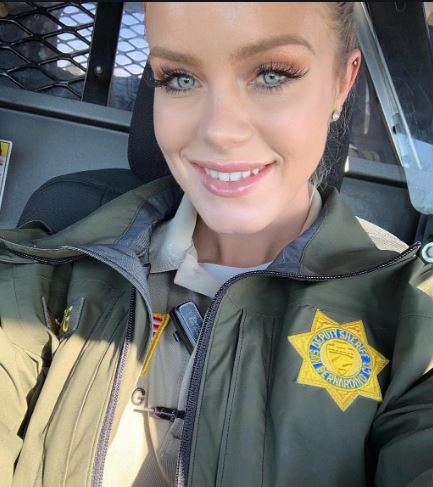 A San Bernardino County Sheriff’s Deputy Meagan Forsberg was injured Wednesday morning in Victorville during in a rolling fight for her gun with a violent black man identified by authorities as 21-year-old Ari Young. He punched her in the face and they fought on the ground. Captured in a video that showed Forsberg fighting for her life. The video opens with the the black suspect repeatedly punching Forsberg in the head and face, and Forsberg attempting to ward him off, Forsberg falls on her back, Young then grabbed the gun out of Forsbergs hand and starting shooting at her.

Did she hesitate to control him due to the backlash of police officers shooting blacks? If so that hesitation almost cost Forsberg her life. Police agencies have been pushed to take extra caution when dealing with blacks, and not be so quick to use the gun due to the outcry on recent officer involved shootings..

Since the Obama years the media has been attacking the police for defending themselves against criminals, especially black criminals. Turn the tables, had she successful shot Young there would have been news 24/7 about shooting an unarmed black man, then protests, riots and looting in the city would have ensued.

Democratic presidential candidates Elizabeth Warren and Kamala Harris marked the five-year anniversary of the Ferguson, Missouri, police shooting of Michael Brown recently with tweets claiming that the cop who shot Brown “murdered” the 18-year-old black man.  Brown was trying to grab Officer Darren Wilson gun much like in this case. Brown had just robbed a liquor store.

Similar to this case Brown and Wilson also fought on the ground, Browns fingerprints were found to be on Darren Wilson police issued gun. A Grand Jury later found Darren Wilson to be not-guilty of Murder, but that was after the city of Ferguson had riots, and been looted, many buildings and businesses burned to the ground.  During the riots a man from Europe, Zemir Begic was beaten to death by a pack of rioting black teens.

Had Officer Wilson not shot at Brown it likely he would be the dead today, that does not stop Democrats from calling the shooting murder.

In this case had Officer Forsberg shot at Young,  Al Sharpton would fly in to Victorville be on every news station condemning her.  The evil white blonde woman shoot at another innocent unarmed black man. Prosecutors would be pressured to charge her from every civil rights group in the country.

Forsberg is lucky to be alive, and this is why cops shoot at uncooperative suspects that choose to fight them.

In Case You Missed It:  Your dominant DELUSION determines how you experience "reality" and how it all ends for you
Posted in Freedoms and tagged Black Privilege, California, Crime, shooting.

By Michael Barone “F.B.I. Used Informant to Investigate Russia Ties to Campaign, Not to Spy, as Trump Claims,” read the headline...