A liberal watchdog group’s attempt to nail Rudy Giuliani has backfired in spectacular fashion after their FOIA request resulted in the US State Department releasing detailed accusations of corruption against the Bidens – based on interviews with former Ukrainian officials who were in charge of the investigations.

Responding to a Freedom of Information Act lawsuit from the group American Oversight, the State Department on Friday night released almost 100 pages of records detailing efforts by Trump attorney Rudy Giuliani to investigate corruption, which include contacts with Secretary of State Mike Pompeo and Rep. Devin Nunes (R-CA) earlier this year.

While American Oversight’s ‘gotcha‘ is that Giuliani had “multiple contacts” with Mike Pompeo and others while investigating Ukraine corruption, they completely ignore interview notes containing detailed allegations by former Ukraine Prosecutor General Viktor Shokin – who Joe Biden had fired, as well as his successor, prosecutor general Yuriy Lutsenko – who “believes Mr. Viktor Shokin the former Prosecutor General is honest.”

“He was appointed to the position of General Prosecutor of Ukraine from 2015 until April of 2016, when he was removed at the request of Mr. Joseph Biden the Vice President of the United States.”

“He [Shokin] became involved in a case against Mr. Mykola Zlochevsky the former Minister of Ecology and Natural Resources of Ukraine. The case was opened as a result of Mr. Zlochevsky giving himself/company permits to drill for gas and oil in Ukraine. Mr. Zlochevsky is also the owner of Burisma Holdings.”

“Mr. Shokin stated that there are documents that list five (5) criminal cases in which Mr. Zlochevesky is listed, with the main case being for issuing illegal gas exploration permits. The following complaints are in the criminal case.

In Case You Missed It:  Trump: ‘Angry Mob’ Must Not Drown Out ‘Righteous Cries of Peaceful Protesters’

“Mr Shokin further stated that there were several Burisma board appointments were made in 2014 as follows:

“Mr. Shokin stated that these appointments were made by Mr. Slochevsky in order to protect himself.“

Shokin then details how in July 2015, “US Ambassador Geoffrey R. Pyatt told him that the investigation has to be handled with white gloves, which according to Mr. Shokin, that implied do nothing. On or about September 2015 Mr. Pyatt gave a speech in Odessa where he stated that the cases were not investigated correctly and that Mr. Shokin may be corrupt.”

“Mr. Shokin further stated that on February of 2016 warrants were placed on the accounts of multiple people in Ukraine. There were requests for information on Hunter Biden to which nothing was received.”

“It is believed that Hunter Biden receives a salary, commission plus one million dollars.”

“President of Ukraine Petro Poroshenko [who Joe Biden threatened to withhold $1 billion in US loan guarantees] told Mr. Shokin not to investigate Burisma as it was not in the interest of Joe and/or Hunter Biden. Mr. Shokin was called into Mr. Poroshenko’s office and told that the investigation into Burisma and the Managing Director where Hunter Biden is on the board, has caused Joe Biden to hold up one billion dollars in US aid to Ukraine.

In Case You Missed It:  Joe Biden Ukraine Scandal Exploding

Lutsenko takes Shokin’s interview one step further in a January 25 phone interview with Giuliani and associates – describing how Ukraine has two secretive units which are protected by a US Ambassador.

“Mr. Lutsenko went on to explain that there is a unit called Specialized Anticorruption Prosecutor’s Office (SAP) which has under its purview National Anticorruption Bureau Ukraine (NABU) which investigates corruption cases that involved public figures from Mayors upward. He stated that the current US Ambassador protects SAP and NABU,” adding “His office has absolutely no control over SAP or NABU and can’t even ask what they are working on however they fall under his “control.”

Of note, NABU was established in October 2014 “by Mr. George Kent who was the Deputy Chief to the Mission in Ukraine.”

In Case You Missed It:  What did JD Salinger know?

Lutsenko “went on to say that he began looking at the same case Mr. Shokin was looking at (mentioned above) and he believes Hunter Biden receives millions of dollars in compensation from Burisma. He produced a document from Latvia that showed several million dollars that were distributed out of Burisma’s account. The record showed two (2) companies and four (4) individuals receiving approximately sixteen million dollars in disbursements as follows:

“Mr Lutsenko stated that there was also a payment of $900,000 to Rosemont Seneca Partners LLC for consulting fees. Hunter Biden is a partner in Rosemont Seneca Partners LLC along with Devon Archer and the dates of this transaction are approximately anywhere from January to December 2015. According to Mr. Lutsenko the $900,000 invoice was for services rendered for lobbying by Joe Biden.”

The statement I’ve made several times of having an insurance policy, if thrown under bus, is sarcastic & relates to the files in my safe about the Biden Family’s 4 decade monetizing of his office.

If I disappear, it will appear immediately along with my RICO chart.

Read the interviews below (and see the full release here): 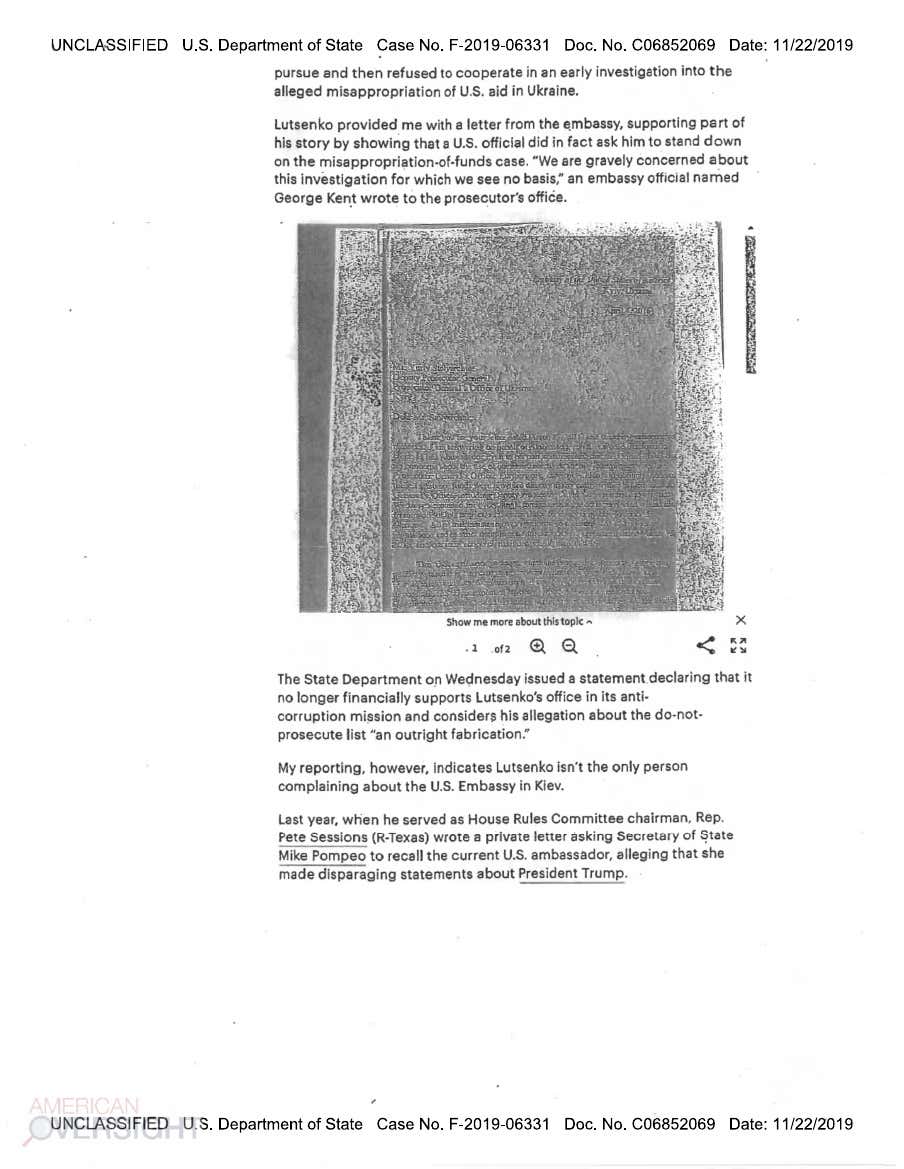 Finally Congress is probing the fraud of the most criminal presidential administration in American history. They are probing money laundering,...