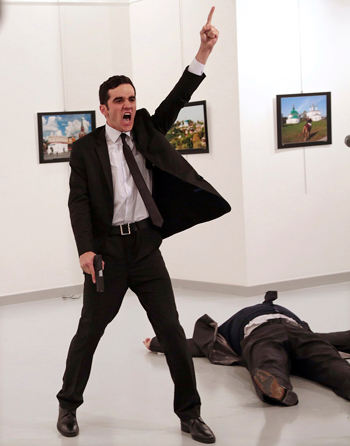 The Russian ambassador is assassinated at an art exhibit by a Muslim terrorist who pledged allegiance to the Islamic prophet Muhammad.

Andrei Karlov, The Russian ambassador to Turkey was shot dead by the terrorist in an Ankara art gallery. Andrei Karlov was several minutes into making a speech when he was killed by Mevlut Mert Alt?ntas.

In Case You Missed It:  Get Ready for the Economic Collapse
Posted in Terrorism and tagged Assassination, Islam, Jihadists, murder, Muslims, Russia, terror, Terrorism, Turkey.

Senator Lindsey Graham (R-SC) on Thursday accused Speaker Pelosi of extorting the President by refusing to send the articles of...