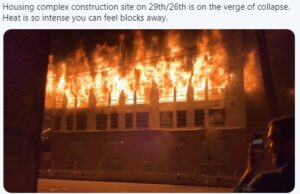 The ongoing violent leftist Riots sparked by the death of career criminal George Floyd have lead to the destruction of a $30 million affordable housing project in south Minneapolis, Minnesota.

The six-story, 190-unit apartment project known as Midtown Corner, which was set to provide housing for low-income families and individuals in the community.  Leftist rioters torched and burned the building to to the ground in a series of 16 structural fires set by rioters, Minneapolis Fire Chief John Fruetel reported in a press conference Thursday.

Many low income families will now have to try and seek other means of housing, many will remain homeless on he streets all thanks to ANTIFA and BLM rioters.  Apparently low incomes lives do not matter to these violent fascist rioters.

The housing complex, developed by Wellington Management, was scheduled to open in next spring, now many of the proposed occupant will have to remain on the streets.

The total development cost was around $37 million, including contingency funds. The land and construction costs were approximately $30 million.

The project was funded almost entirely by private funds, with only $340,000 in public money being contributed. All destroyed by the intolerant left, black lives matter rioters and fascist ANTIFA  lunatics.

The practice of organizing “pandemic pods,” in which parents team up with other families in their neighborhoods or social circles...