A Reddit group called Wallstreetbets where regular Reddit users turned the fixed Wall Street System favoring the average Jane and Joe.  The Reddit posters made millions as Wall Street hedge funds lost billions on GameStop’s wild stock ride. The epic short squeezes had some hedge funds being carried out because their naked shorts have blown up. Reddit clamped down on the WallStreetBets page closing it down for 24 hours.

Free trading site like Robinhood  allowed small investors who can play the Wall Street cronies at their own game of Hedge funds manipulating stocks all the time , gang up on the institutional short seller and beat them at their own game.

Stocks with very high short interest are the perfect stocks for a group like WSB to target. The shorts are forced to cover, adding to upward momentum. Genius strategy actually. The days of short selling may be ending. If investors were short something with a massive short interest, they should be very nervous. Short sellers may have to considering covering before becoming the next WSB target.

The brokerages came in to save their Head fund cronies, then going to ban the buy side by banning the purchase of specific stocks and call options, but allowed people to exit their positions. So all the demand dried up and the supply crushed the stocks, resulting in massive losses on at least GME, AMC, and NOK.

This allowed the Billionaire hedge funds to not lose as much money. There are clear damages involved, and it’s going to come down to what the terms of service say in terms of arbitrary restrictions. If they can show collusion with other groups they’re really in trouble.

Either way Robinhood and other brokerages could be soon drowning in lawsuits. The Online brokerage Robinhood has already been named as a defendant Thursday in several federal suits demanding it reinstate trading of shares including GameStop, BlackBerry Ltd., Nokia Oyj and AMC Entertainment Holdings Inc.

Robinhood folded on its earlier decision to block buying of several high-profile stocks, Bloomberg reports the company has drawn down some of its credit lines with banks.

This morning Tom Woods called it “The Gamestop Rebellion”, observing:

If the average American suffers a loss, that’s a darn shame. If big players suffer a loss, shut everything down! TD Ameritrade became the first exchange to impose “unprecedented” restrictions on GME trading, we predicted what would happen next: “expect many more exchanges to follow suit, because hedge funds clearly need to be protected when faced with the retail daytrading mob.”

24 hours later, we were proven correct when first Robinhood (an “orderflow” cash cow for Melvin Capital owner Citadel), then Interactive Brokers, then Schwab and countless other brokerages announced – as if on preagreed terms – to halt trading in GME, AMC, BB, BBY, EXPR, KOSS, NAKD, NOK, SNDL, ALL and various other names.

The system is structured so that Joe Public loses, and the Establishment always wins, even if they have to change the rules or endlessly move the goalposts to do it with the bought out and paid Government always there to aid them.

But now they are fighting back!

People on Wall Street only care about the rules when they're the ones getting hurt.

It's time for SEC and Congress to make the economy work for everyone.

As Incoming Chairman of the @SenateBanking Committee, I will be holding a hearing on the current state of the stock market. https://t.co/V9Hzp26jRT

We suspect that the real culprit behind all of this will remain behind the curtain – The Fed’s endless easy money and downside protection.

The irony of @RobinhoodApp being named Robinhood when very clearly their entire agenda is to steal from poor and give more to the rich is not lost on me.

When @AOC and @DonaldJTrumpJr are on the same side you know you fucked up @RobinhoodApp pic.twitter.com/y15FBqrUu9

The business model of Wall Street is fraud. 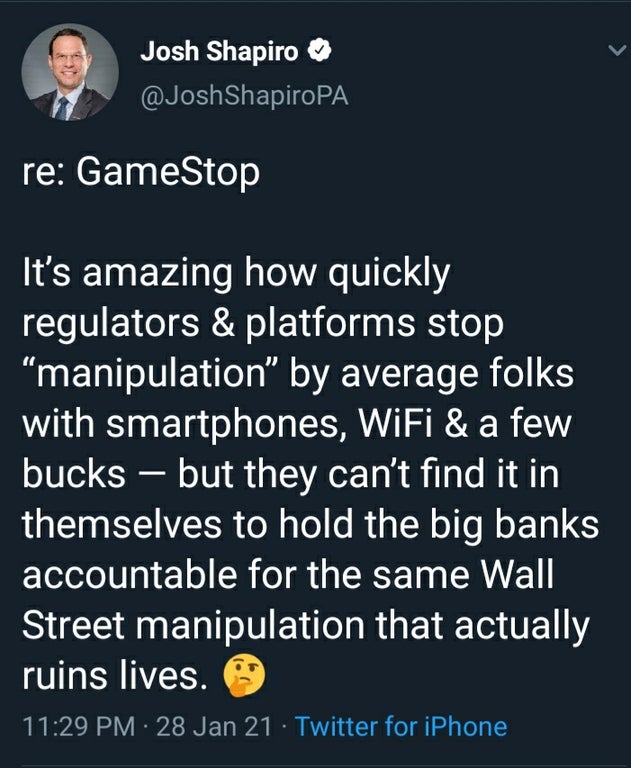 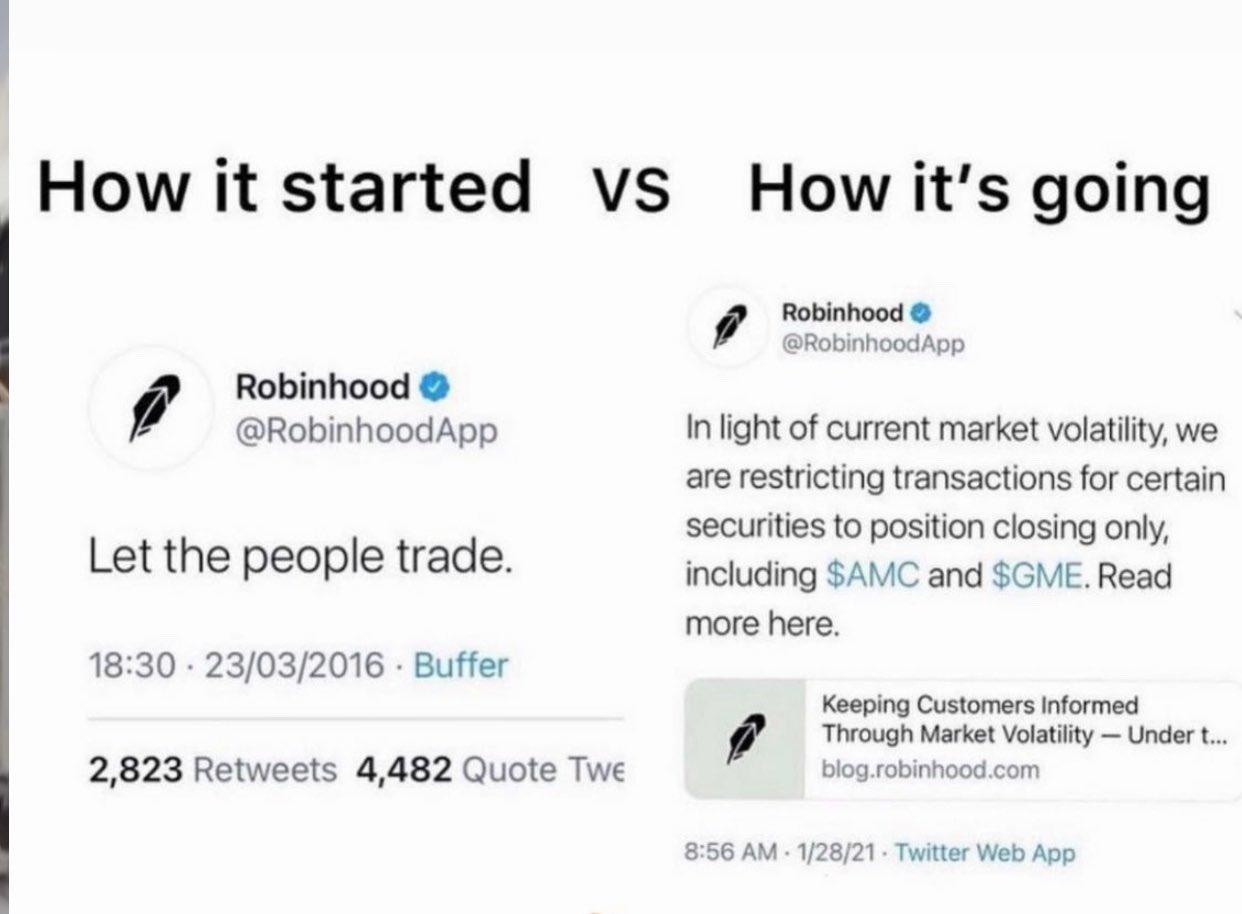 After all, during countless episodes of market turmoil before, brokers had never taken it upon themselves to become the market’s supervisor and suspend trading in one or more shares.

It appears that there are several reasons, the first of which may have to do with some backroom deals.

First, consider that Citadel, which as regular readers know is the biggest source of revenue for Robinhood…

Don’t expect Establishment Biden to do the right thing, Joe Biden picked ex-Federal Reserve chair Janet Yellen as his treasury secretary.  Problem is Janet Yellen received around $810,000 in speaking fees from the hedge fund that bailed out one of the primary losers in the recent Gamestop frenzy.

Yellen’s financial disclosure shows her making $337,500 for multiple days in Oct. of 2020 from Citadel. She similarly banked $292,500 in October of 2019 and $180,000 in December of that year. So far the Biden admin has not mentioned anything about her recusing herself.

If anything the Biden cartel is in bed with billionaire hedge funds, expect them to side with them and figure out a way to punish the small time investors. Although Biden is being put into a corner having to decide on the people or his establishment friends that prop up the campaigns of Democrats, who will he choose to side with?? 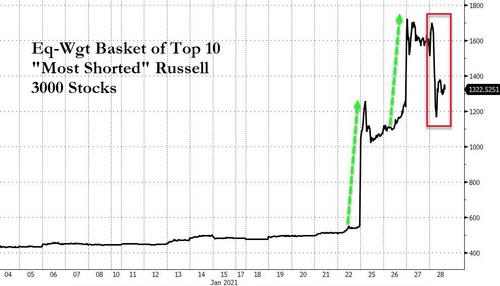 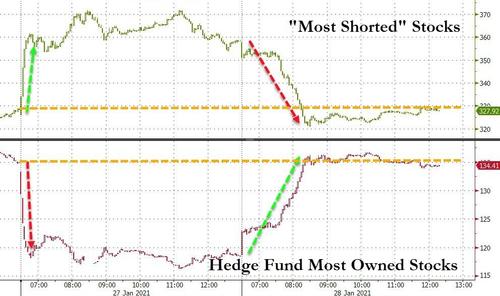 Guys this is the first chink in the armor of this bull market basically the system subsidizes HFs now through their prime brokers aka Wall Street. This is a public relations nightmare for the Fed and the new White House

Basically they asked to help stop the WSB long army.

Despite the crackdown by the  brokerage houses on restricting trading on Gamestop, AMC Entertainment, and others, Americans’ curiosity in the “mother of all short squeezes” has resulted in record-high internet searches into what this market chaos means.  According to Google Trends, searches for “short squeeze” and “most shorted stocks” have soared to record highs this week.

Searches for “short squeeze” has become a national phenomenon. In nearly every state, people are searching for the financial term, which is a rapid increase in the price due to a lack of supply and an excess of demand for the stock due to short-sellers covering their positions. Searches for “short squeeze” were the highest in New York, New Jersey, Massachusetts, California, and Maine.

When the 1% drain the nation’s wealth into their pockets, it’s called smooth market operations.

When the little guy starts making money off the overlords, it’s called deviant collusion and shut down at all costs.

If there is still anything right in this world, there should be lawsuits, criminal charges, a congressional investigation, and people in jail.

@RashidaTlaib @aoc there should be a congressional hearing

Joe Biden signed an executive order to stop the building of the border wall immediately after his virtual unattended inauguration....