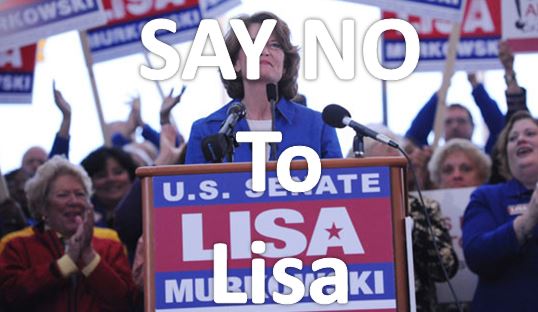 Donald Trump is going to launch a campaign against Republican Senator Lisa Murkowski.

Murkowski is exactly the type of Republican the GOP no longer needs or can afford. She caves to the left and sides with Democrats too often. The right needs fighters.

Democrats and the media will come to Murkowski’s defense and that’s precisely why she needs to go.

TRENDING: Update: Trump Sent a Cease-and-Desist to the RNC Demanding They Stop Using His Name

Former President Donald Trump is making official his plans to target Republican Sen. Lisa Murkowski, vowing to travel to Alaska to campaign against her ahead of the 2022 midterm elections.

In a statement to POLITICO on Saturday, Trump said: “I will not be endorsing, under any circumstances, the failed candidate from the great State of Alaska, Lisa Murkowski. She represents her state badly and her country even worse. I do not know where other people will be next year, but I know where I will be — in Alaska campaigning against a disloyal and very bad Senator.”

Murkowski, who has held her seat since 2002, has been a longtime critic of the former president and was one of seven Republican senators to vote to convict him in last month’s impeachment trial. She is the only one of the seven to face reelection in 2022.

A Murkowski spokesperson did not respond to a request for comment.

Trump’s statement comes just days after Murkowski advanced the nomination of Rep. Deb Haaland (D-N.M.) to serve as interior secretary, which Trump called “yet another example of Murkowski not standing up for Alaska.”

People on the right have had enough.

Just a reminder that Lisa Murkowski is up for reelection next year.

Trump Statement: “I will not be endorsing, under any circumstances, the failed candidate from the great State of Alaska, Lisa Murkowski.”

It’s time for Republicans to get their house in order.

PURE MARXISM: Prosecutor Argues Pro-Trump “Shaman” Jacob Chansley Should NOT Be Released Because He Might ‘Push False Claims of Election Fraud” Once Released