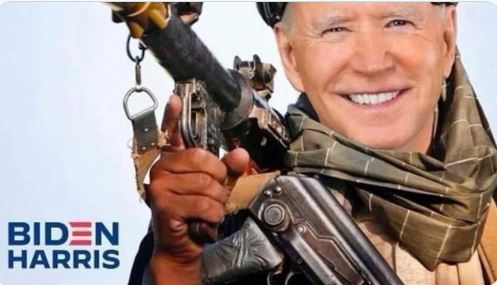 The fraudulent Biden administration continued to ship new firearms, drones, communication gear, and more to the nation that they were planning to abandon in just a few short weeks. Even as the Taliban takeover continued, the shipments continued.

According to one official, reported by Reuters, “the current intelligence assessment was that the Taliban are believed to control more than 2,000 armored vehicles, including U.S. Humvees, and up to 40 aircraft potentially including UH-60 Black Hawks, scout attack helicopters, and ScanEagle military drones.” That’s not just a few pieces of military equipment, that’s essentially a start-up kit for a defense force.

These ignorant western “feminists” need to stop siding with misogynists.

One of these generals engineered this takeover of Kabul..- The Federalist

This wasn’t “incompetence”… It was done on purpose.

That’s why our weapons were left in tact for them to use instead of being rendered useless which is basic military protocol.

Communist China installed Traitor Joe using the Dominion voting machines which were not supposed to have internet connection capability.

We saw the numbers switch from Trump to Biden in real time… It’s on video.

Traitor Joe is doing what his Communist handlers tell him to do..

Communist China’s Belt and Road Initiative runs right through Afghanistan… Look it up.

And if you are still skeptical, just note the following:

* Per the request of Communist Chinese scientists, Coronavirus (COVID-19) Records Were Deleted from a US Database.

* Biden invites the United Nations to probe US over “racism”.

Actress Melissa Joan Hart, 45, blamed unmasked children for her Covid ‘breakthrough’ diagnosis in a deranged rant this week. The...