CTH has been waiting to write this because we first needed to see how both wings of the Uniparty vulture in DC were positioning.  Now, with clear vision, eyes wide open and clarity of focus the issue must be centered.

How are Americans going to respond when Washington D.C, the Fourth Branch of the security and surveillance state, and all the institutions of the United States government, officially declare that Donald John Trump will not be permitted to run for office?

If you have not thought about that question, we had better hurry up and get that conversation front and center.

It’s about to happen, and President Trump knows it. 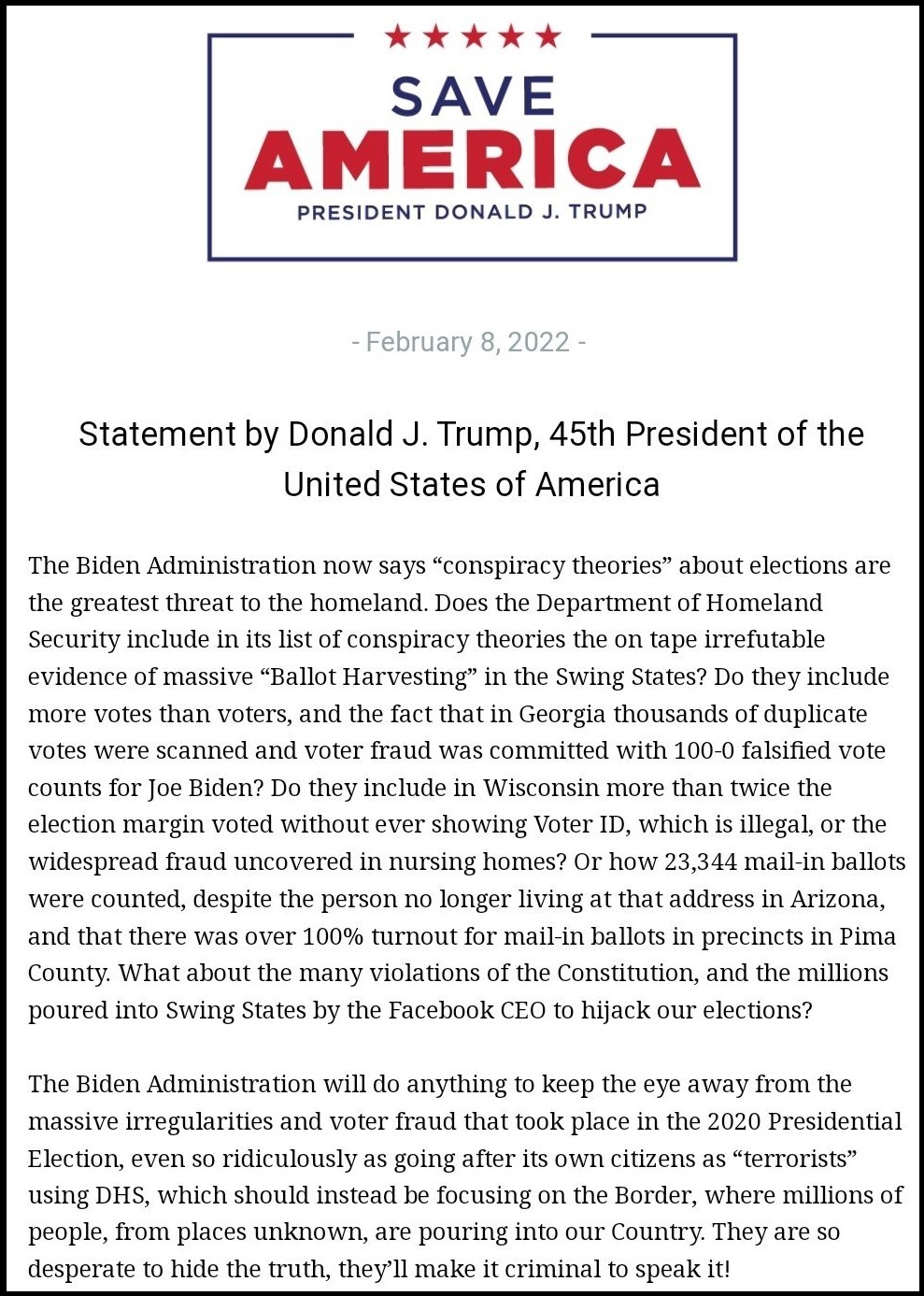 The specific phrase, “They are so desperate to hide the truth, they’ll make it criminal to speak it,” does not only pertain to the election fraud.

If ‘conspiracy theories’ about elections are the greatest threat to the homeland then why hasn’t the DHS named and arrested the ‘terrorists’ who fostered and conducted the never-ending inquisition accusing Donald Trump of colluding with the Russians to steal the election from Hillary Clinton in 2016.

We really need to start thinking carefully and strategically about this.

The institutions of the United States government cannot ever admit:

(1) What they did in the 2016 election with illegal campaign surveillance of political opposition.  How they weaponized the administrative state. How the intelligence agencies within the executive branch coordinated with legislative branch intelligence oversight (SSCI) and Gang of Eight members to target, then isolate, marginalize and remove Donald J Trump.  How the executive and legislative branches then manipulated the judicial branch to support their activity (FISA Courts).

(2) That Robert Mueller’s appointment was intended exclusively to cover up what took place in 2016; then to assist the effort in outlasting any internal review until Trump could be removed.  The entire DC establishment know this to be true.  Not a single voice ever discusses it publicly. (Why?)

(3) That COVID-19 was used purposefully to create fear.  That created fear was then weaponized by the same people in the same three branches of government for control and exploitation on an international scale.  Which includes all of the false mitigation efforts used as part of that control; and, more importantly, the use of a “vaccine” to maintain the architecture needed for the control.

(4) That all of the entities associated with the reference points above have no way to retreat.

With the scale of this in mind – and I do mean we need to think about the scale here – there is no way these same people, domestically and internationally, can run the risk of letting Donald Trump become President of the United States again.

Too much has been revealed.  The Alinsky approach will not work, because it hasn’t been able to work.  The entire premise of the J6 committee is based on their knowledge they will need to make this announcement.  The J6 committee is the 2022 version of the 2017 Muller appointment.

The system will make that announcement.  It’s not a matter of ‘if‘, it is an issue of ‘when‘.

….What do we do when they make that announcement?

“This is no small thing, to restore a republic after it has fallen into corruption. I have studied history for years and I cannot recall it ever happening. It may be that our task is impossible. Yet, if we do not try then how will we know it can’t be done? And if we do not try, it most certainly won’t be done. The Founders’ Republic, and the larger war for western civilization, will be lost.”

“But I tell you this: We will not go gently into that bloody collectivist good night. Indeed, we will make with our defiance such a sound as ALL history from that day forward will be forced to note, even if they despise us in the writing of it.”

Our Father, who art in heaven, hallowed be thy Name. Thy kingdom come. THY WILL BE DONE, on earth as it is in heaven. Give us this day our daily bread. And forgive us our trespasses, as we forgive those who trespass against us. And lead us not into temptation, but DELIVER US FROM EVIL.

For Thine is the kingdom and the power and the glory, forever and ever. Amen †

In Case You Missed It:  Lithuania and Poland Lighting the Fuse Toward World War III
Posted in Freedoms and tagged deep state, Election, Trump.

By Wendell Husebø on Twitter and Gettr @WendellHusebø. The establishment media ignored news over the weekend from the John Durham probe that alleged Hillary Clinton’s...