That’s because there is no real economic recovery at all.

So why is the stock market up so much?

The rally in the market has exactly nothing to do with the economy and the outlook for it. It is tied to one and only one thing – the decline in the dollar. 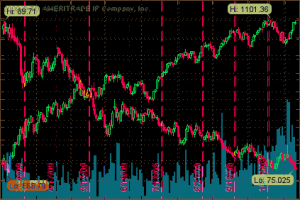 A WEAKER, EVEN COLLAPSING, DOLLAR IS NOT COMMENSURATE WITH OR INDICATIVE OF A STRONGER ECONOMY.

You’re free to believe in any thesis you’d like with regards to economic recovery. But a strong economy is correlated with a stronger currency – that is, the underlying strength of America, along with her ability to support her currency via current and future production, which translates into the ability to raise tax revenues and thus cover debt.

Since March The Federal Reserve and Federal Government have in fact promulgated and prosecuted policies that do the exact opposite. The stock market has responded not to forward economic prospects, as is often claimed, but rather to the “hot money” flows of foreign and domestic speculators and a dollar-based carry trade engendered by The Fed’s zero-percent interest rates.

Yes, the stock market could go to all-time highs – for a short while – if this is allowed to continue. But oil (priced in dollars) would be $300 and the dollar would be at 40 – everything you buy that is imported would literally double (or more) in price, and your standard of living, since energy is in everything, would be cut in half – or worse.

How well will the stock market do over the intermediate and longer term when the 70% of the economy that is consumer spending (that’s you, dear reader!) is destroyed by ramping import costs – whether the government calls that “inflation” or not?

Japan tried this same game when they got in trouble 20 years ago and they failed to produce lasting economic growth and prosperity. What they did produce was near-exact correlated market rallies and Yen devaluations, but 20 years later, despite huge rallies in the stock market as we have seen in ours, The Nikkei remains some 60% off it’s all-time high, with no realistic prospect of reaching that high at any time in the foreseeable future.

The mainstream media will not show you the above, as they put the lie to any claim that the market is “foreshadowing” economic recovery in the next six to twelve months.

It is doing no such thing – it is responding to hot money flows that are being intentionally generated and, if you follow them as an investor (rather than as a minute-by-minute trader) you will be crushed, just as those who bet on recovery in Japan following their original collapse were.

Bernanke, Geithner and the other stooges in our government and media are intentionally misleading you.

Obama Administration figures deliberately understate economic downturn The true rate of unemployment for October 2009 may be 22.1 percent, not...