The al-Qaeda leader is using it as a platform to show videos and speeches to Islamic militants. 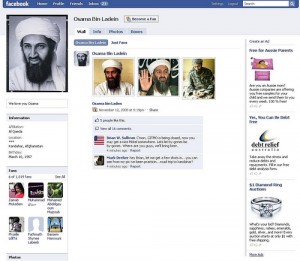 His address is given as “the mountains of the world”. Last night, security experts urged Facebook’s US owners to shut down the profile page, named “The leader of the Mujahideen, Osama bin Laden.”

A Sun investigation revealed it became active less than a month ago but had already attracted nearly 1,000 extremists. Access is via the Taliban’s own Facebook presence.

Although the language used is Arabic, messages in English have started to appear.

There is a €16million reward for the capture of bin Laden, who is believed to be hiding in mountains between Pakistan and Afghanistan.

In Case You Missed It:  Reign of Terror: The Popular Front for the Liberation of Palestine
Posted in Terrorism and tagged Islam, Osama bin Laden, Terrorism.

Railway porter-turned-billionaire financier George Soros delivered a stark warning that the financial world is on the wrong track and that...