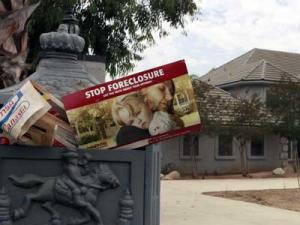 If monthly Foreclosures double (hypothetically) to 180k from April’s record 92.5k and stay at that level — based upon the 1) monthly average Notice-of-Default (NOD) 2) HAMP and private mortgage mod volume 3) and conservative cures and redefault rates — it will take 42 months to clear the portion of the 8mm loans presently in the distressed pipeline that will ultimately be liquidated. If Foreclosures remain at April’s record high of 92.5k, it will take 101 months.

With 900k record foreclosures in 2009 (but only 2.3mm since Jan 2007), 2.16mm (180k*12) needed every year for the next four years to purge the distress inventory plaguing and overhanging the market, and potentially fewer existing sales in 2010 than the 5.15 million in stimulus-driven 2009, it is easy to understand the challenge facing the housing market ex-stimulus.

I am a firm believer that the only way the housing market stands a chance of maintaining momentum post-tax credit is for Foreclosures to surge because they are what are in demand. In fact, over the past few months investor demand has waned due to the lack of Foreclosures and competition from swarms of first-timers waiving Obama coupons who they refuse to bid against. First timers, who are notorious for turning it off and on overnight, now make up some 50% of all sales according to the most recent Existing Home Sales report. That is a shaky foundation.

But surging Foreclosures — plus surging short sales in recent months — will significantly increase the distressed-to-organic sales ratio negatively impacting reported median and average house prices., which have benefited from a falling ratio over the past several months with distress sales as a percentage of total sales dropping every month in 2010.

But even at April’s 92.5k record Foreclosure pace — at a time when stimulus is ending, with sales volume set to fall and servicer’s assigning more Foreclosure resales to real estate brokers in April than in all of Q1 combined — prices stand to fall under considerable mix-shift pressure in the near-to-mid term.

Massive-scale home retention (mortgage mod) programs have truly helped only a small slice but primarily served to slow up the pace at which foreclosures have occurred over the past year. This has created a giant bubble of distressed homeowners in the pipeline that over time will be liquidated.  But in order to get through it the bubble has to quit expanding. Herein lies the challenge.

Based upon the past year’s average monthly Notices-of-Default, house retention and redefault figures taken from the MBA and OTS quarterly reports, and the Making Home Affordable monthly HAMP report, the number of loans being permanently modified each month is only 30% greater than receive an NOD each month. But after a conservative 50% redefault rate is applied to the retention actions and a 90% liquidation rate to the NOD’s, the number of NOD’s headed for liquidation outpaces retentions by 38%.

This means that the sum of all loan mod programs on the market today is not letting any air out of the massive distress loan (shadow inventory) bubble. 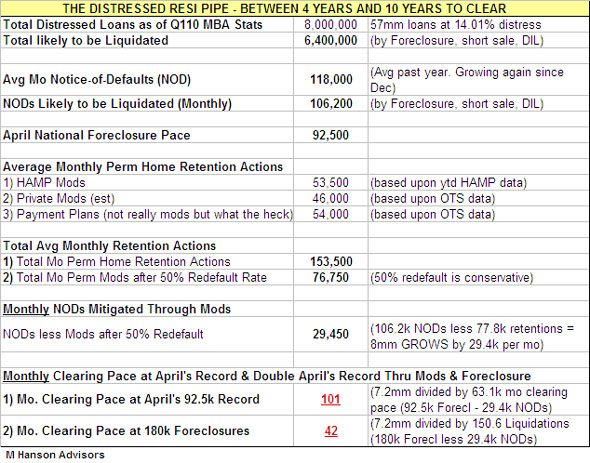 Think Tanks as the Hidden Hand