By Joseph Farah– Ever since I wrote a column last October called “Myths of the Middle East,” readers from around the world have asked me what is meant by the term “Palestinian.”

The simple answer is that it means whatever Yasser Arafat wants it to mean. 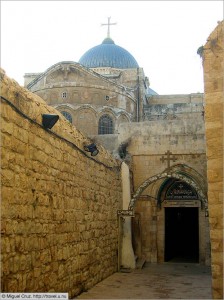 Arafat himself was born in Egypt. He later moved to Jerusalem. Indeed, most of the Arabs living within the borders of Israel today have come from some other Arab country at some time in their life.

For instance, just since the beginning of the Oslo Accords, more than 400,000 Arabs have entered the West Bank or Gaza. They have come from Jordan, Egypt and, indirectly, from every other Arab country you can name.

The number of Arab settlers is based on statistics collected on the Allenby Bridge and other collection points between Israel and Jordan. It is based on the number of Arab day workers entering but not leaving Israel. The numbers were published by the Israel Central Bureau for Statistics during the administration of Binyamin Netanyahu and subsequently denied as “recording errors” by the Ehud Barak administration.

Of course, the Barak administration had incentives for denying the high illegal immigration numbers, given its heavy political reliance on Arab voters.

Is this a new phenomenon? Absolutely not. This has always been the case. Arabs have been flocking to Israel ever since it was created and even before, coinciding with the wave of Jewish immigration into Palestine prior to 1948.

Winston Churchill said in 1939: “So far from being persecuted, the Arabs have crowded into the country and multiplied till their population has increased more than even all world Jewry could lift up the Jewish population.”

And that raises a question I never hear anyone ask: If Israel’s policies make life so intolerable for Arabs, why do they continue to flock to the Jewish state?

This is an important question as we see the Palestinian debate now shift to the issue of “the right of return.”

According to the most liberal claims by Arab sources, some 600,000 to 700,000 Arabs left Israel in and around 1948 when the Jewish state was created. Most were not forced out by Jews, but rather left at the urging of Arab leaders who had declared war on Israel.

Yet, there are far more Arabs living in these territories now than ever before. And many of those who left in 1948 and thereafter actually had roots in other Arab nations.

Arabs outnumber Jews in the Middle East by a factor of about 100 to one. But how many of those hundreds of millions of Arabs are actually Palestinians? Not very many.

The Arab population of Palestine was historically extremely low — prior to the Jews’ renewed interest in the area beginning in the early 1900s.

For instance, a travel guide to Palestine and Syria, published in 1906 by Karl Baedeker, illustrates the fact that, even when the Islamic Ottoman Empire ruled the region, the Muslim population in Jerusalem was minimal.

“The number of Jews has greatly risen in the last few decades, in spite of the fact that they are forbidden to immigrate or to possess landed property,” the book states.

Even though the Jews were persecuted, still they came to Jerusalem and represented the overwhelming majority of the population as early as 1906.

Why was the Muslim population so low? After all, we’re told that Jerusalem is the third holiest city in Islam. Surely, if this were a widely held belief in 1906, more of the devout would have settled there.

The truth is that the Jewish presence in Jerusalem and throughout the Holy Land persisted throughout its bloody history, as is documented in Joan Peters’ milestone history on the origins of the Arab-Jewish conflict in the region, “From Time Immemorial.”

It is also true that the Arab population increased following Jewish immigration into the region. The Arabs came because of economic activity. And, believe it or not, they came because there was more freedom and more opportunity in Israel than in their own homelands.

What is a Palestinian? If any Arabs have legitimate claims on property in Israel, it must be those who were illegally deprived of their land and homes after 1948. Arafat has no such claim. And few if any of those shooting, bombing and terrorizing Israelis today do either.

In Case You Missed It:  9-11-2001 NEVER FORGET
Posted in Israel and tagged Islam, Israel, Palestinians.