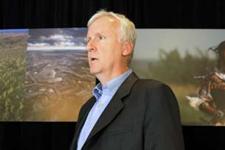 Millions of people around the globe have flocked to movie theatres to see director James Cameron’s hit films such as “Titanic” and “Avatar.” But in order to have the money to pay for those movie tickets, viewers had to have a job. Such is the irony in Cameron’s latest political activity, which will effectively kill jobs in California—the very state where Cameron resides, and home of the movie industry.

Over the weekend it was announced that Cameron is donating $1 million to California’s No on Proposition 23 campaign. Proposition 23 will suspend AB 32, the “Global Warming Solutions Act” passed in 2006, until unemployment returns to 5.5% for one full year. In a state where unemployment tops 12.4 percent, Proposition 23 makes perfect sense.

It’s estimated that suspending AB 32 will kill over 1.1 million jobs when it’s fully implemented. It will cost the average California family almost $4,000 in increases costs on food, utilities and transportation. Small businesses could face almost $50,000 in increased costs and fees—that’s at least one or more employees’ salary that will be lost.

Suspending AB 32’s draconian, cumbersome environmental regulations until businesses can recover and start creating jobs again is the right thing to do for California’s economy and its jobless citizens.

Unfortunately, Cameron and his hypocritical ilk don’t see it that way.

James Cameron, you’ll recall, directed the hit “Terminator” film series, which starred Governor Arnold Schwarzenegger during his days as a Hollywood action hero. Schwarzenegger has pegged his gubernatorial legacy on saving the planet through environmental laws such as AB 32. Since being elected to office (and running from the conservative principles he campaigned on), Schwarzenegger has implemented the radical environmental beliefs he obviously shares with Cameron and other Hollywood politicos.

But both Schwarzenegger and Cameron have proven themselves to be utter hypocrites: preaching the environmental gospel while living like energy-hogging, pollution-producing kings.

While they demand average citizens live on less, both own palatial homes, jet-set around the world, and drive numerous expensive vehicles. Radar Online has photos of Cameron’s six bedroom, seven bathroom, 8,272 sq ft home in Malibu. How much energy does it takes to maintain that palace?

When he was promoting his love letter to the environment known as “Avatar,” Cameron had no problem flying fuel-guzzling jets around the world. And how many CO2s were emitted during the $200-plus million production of “Avatar”?

Cameron seems to understand the importance of creating jobs. In an interview with Entertainment Weekly last December, he dismissed pre-release skepticism about “Avatar’s” ability to make money by commenting, “But we still made 2,000 jobs for three years, and that’s a good thing.”

Yes, creating 2,000 jobs is a good thing, but a successful movie, like a successful business, needs to turn a profit in order to survive and pay for those jobs. If Cameron wants to continue raking in the “green” for the movies he makes, he needs to stop supporting causes that kill the jobs enabling movie goers to actually purchase a ticket to his films. And he needs to stop hypocritically telling others to live primitively as he lives luxuriously.

It’s certainly appropriate that Cameron and Schwarzenegger are teaming up against Proposition 23. After years of collaboration on the “Terminator” movies, they’re now busy terminating California jobs.