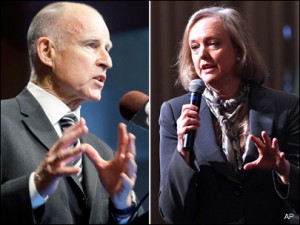 The latest Rasmussen Reports statewide telephone survey of Likely Voters shows Brown picking up 49% support, while Whitman draws the vote from 45%. Two percent (2%) prefer some other candidate, and three percent (3%) are still undecided.

These numbers move the race from Leans Democrat back to a Toss-Up in the Rasmussen Reports Gubernatorial Scorecard.

Last week, Brown held a 48% to 42% edge over Whitman. Support for Brown, a longtime Democratic figure in the state who previously served as governor from 1975 to 1983, has steadily risen from 40% in late August. Backing for Whitman, a former CEO of eBay, has fallen slightly from a high of 48% in the same period.

In four surveys conducted throughout October, Brown has earned 48% to 50% of the vote. Whitman has picked up 42% to 45% vote in the same period.

The survey of 750 Likely Voters in California was conducted on October 27, 2010 by Rasmussen Reports. The margin of sampling error is +/-4 percentage points with a 95% level of confidence. Field work for all Rasmussen Reports surveys is conducted by Pulse Opinion Research, LLC.

Other data from this survey can be found at www.rasmussenreports.com/California.

Who’s leading among those who have already voted? Do California voters prefer someone with a political background or someone who’s been very successful in the business world?

In Case You Missed It:  Is the Italian government directly involved in the US election fraud against Trump
Posted in Freedoms and tagged California, Election.

WASHINGTON – A package containing explosive materials was intercepted in Dubai on its way from Yemen to a Chicago Jewish...