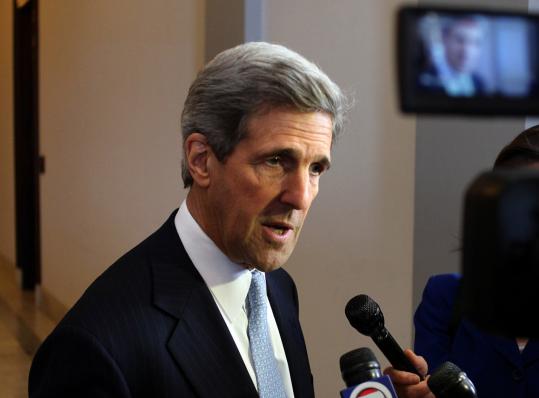 Today on the Senate floor, John Kerry (D-MA) informed 15,304,498 voters from 16 states that their democratic voice is better left unheard. Kerry’s remarks came during a speech in which he urged the ratification of the ill-conceived New START (Strategic Arms Reduction Treaty) with Russia. Kerry and other Senate liberals are striving to ratify the treaty during this winter’s lame duck session, the last chance for Senators who have received their walking orders from the voters to pass the kind of legislation that got them kicked out of Washington in the first place.

In a recent Heritage Foundation report, Dr. Matt Spalding writes, “the ratification of New START by a lame duck Senate would not only ignore the message sent by voters in November but also break a significant precedent, consistent with the principle of consent, maintained by Presidents and Congresses since the passage of the Twentieth Amendment in 1933.”

Kerry seems to take a different view. Today he remarked on the Senate floor, “[the incoming class of Senators] may have been elected in this election, but they haven’t taken part in the year-and-a-half-long effort of preparing to deal with this treaty. Every Senator here has. All 100 of us walked up to the well, raised our hands and swore to uphold the Constitution of the United States, and that constitution gives us the specific responsibility of advice and consent on a treaty.” Kerry seems to forget that many of his colleagues have felt the other edge of the democratic sword: voters have already spoken on what they think of those Senators’ ability to fulfill their oaths. Senators only have power over the people so long as the people give them power. When the people have spoken against their representatives and replaced them, those that remain would be wise to respect both the Constitution and the American people it protects by allowing the incoming Senate to decide this crucial issue.

Most of the time being number one is good. But when it comes to having the highest tax rate in...