Rolling out the red carpet, lining Constitution Avenue with Communist flags, and treating unelected Chinese dictator Hu Jintao to lavish White House dinners while he badmouths the U.S. dollar is hard enough to stomach, but there are a plethora of ways in which China is humiliating the United States as the globalists get ready to use China as the vehicle through which to complete the deindustrialization of the decaying American banana republic.

1) Tainted Chinese food imports are pouring into the United States with wanton disregard for the health impact or threat to the wider food supply. The Washington Post reported on how dried apples preserved with a cancer-causing chemical, frozen catfish laden with banned antibiotics, Scallops and sardines coated with putrefying bacteria and mushrooms laced with illegal pesticides were just some of the items from China that the Food and Drug Administration detained at U.S. ports in one month alone. 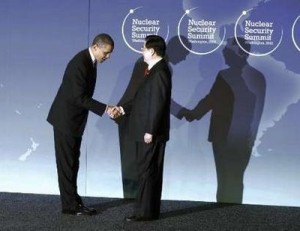 2) Not just food, but also lead-poisoned children’s toys imported from China are flooding the US marketplace. Talking heads in the establishment media like CNBC’s Erin Burnett insist that Americans should shut up about these scandals and accept the fact that their kids will be eating tainted food and playing with lead-poisoned toys, otherwise China might arbitrarily punish the US by re-valuing its currency and pushing up prices in Wal-Mart.

3) While Hu Jintao and Obama spew rhetoric about two great empires coming together for the common good, China is busy stealing US military secrets. China’s massive military build-up is based almost entirely on stolen US technology, a recent example being China’s new prototype stealth fighter, which is 10 years ahead of the schedule that US military analysts had predicted. The announcement of the new stealth fighter was a massive humiliation for Obama and Defense Secretary Gates, an intimidating flaunt that forced the Obama administration into ludicrously attempting to play down the significance of the fighter on the eve of Jintao’s state visit.

4) Computer hackers in Beijing backed by the Chinese government have also stolen highly sensitive information about America’s nuclear weapons research from places like the Los Alamos National Laboratory in New Mexico. Technology and military secrets have also been openly transferred to China by successive US administrations as well as transnational American companies.

5) If China wishes to be America’s great ally, as Jintao constantly claims, then why are Chinese military generals constantly talking about attacking the United States? Speculating on what the response would be if America defended its ally Taiwan, General Zhu Chenghu said that China would launch its arsenal of nuclear missiles at the United States and destroy hundreds of cities. China has also recently unveiled an anti-ship missile which is designed to sink an American aircraft carrier. Admiral Mike Mullen, head of the Joint Chiefs of Staff, admits that China’s military weapons are aimed squarely at the United States.

6) As the largest holder of US debt, China has the power to lead the dollar like a sheep to slaughter, which is precisely what Hu Jintao signaled earlier this week when he derided the dollar as a “product of the past” and called for its replacement with a new global monetary system based around the Chinese yuan. Indeed, when US Treasury Secretary Timothy Geithner gave a speech in which he claimed that the US dollar was strong, Chinese onlookers responded by bursting into laughter.

7) China has been used by the globalists to destroy America’s economic backbone – its manufacturing base. As a result of the expanding trade deficit with China, the US economy lost 2.4 million jobs between 2001 and 2008. The United States has lost a shocking 32 per cent of its manufacturing jobs in this time. Over 42,000 factories have been permanently closed in the US since 2001. Made in America has been replaced by Chinese slave goods sold in Wal-Mart, gleefully consumed by ignorant Americans blissfully unaware of the fact that they are destroying their own children’s future prosperity.

8: China is buying up US infrastructure at a rapid pace as successive US presidents acquiesce to a fire sale of American assets to the Communist regime at knock down prices. In 2006, Hutchison Whampoa Ltd was given a no-bid contract by the US government to take over radiation detecting security just 65 miles away from Freeport in the Bahamas with no oversight. Hutchison Whampoa is admittedly a holding of the Chinese navy and the People’s Liberation Army. Hutchison Whampoa owns ports all over the world and many charge that the Chinese are using the company to encircle the world in preparation for retaliation to opposition of China’s intended invasion of Taiwan. In 1997 the Communist Chinese government took over the Long Beach Naval Air Base, the only major deep water port that can take large ships on the west coast. In 2000, Hutchinson Whampoa, run by the PLA, took over the Panama Canal and has stationed between 15,000 and 30,000 troops at the facility.

9) While America is being picked apart by the globalist vultures as part of the west’s enforced post-industrial revolution, China is fast becoming the new global empire, with new GDP estimates showing that China’s economy is now bigger than that of the US in terms of purchasing power. “According to Stanford University economics professor Ed Lazear, if the U.S. economy and the Chinese economy continue to grow at current rates, the average Chinese citizen will be wealthier than the average American citizen in just 30 years,” writes Economic Collapse Blog, which is a startling premise given the fact that hundreds of millions of Chinese people still live in abject poverty. Despite this, the deindustrialization of the United States that has paved the way for the roaring economic growth of the Red Dragon shows no signs of abating.

10) China is the model state for the new world order. No freedom of speech, no right to assemble, no right to own firearms, a country ruled by unelected dictators that tortures and massacres political dissidents and forcibly aborts the babies of women who dare to challenge the country’s brutal one child policy. China mocks what little semblance of freedom the United States has left, while US presidents consistently offer no more than weak rhetoric when exposing China’s habitual abuse of freedom.

In Case You Missed It:  Chevron Selling California Property – Moving Company And Jobs To Texas
Posted in Freedoms and tagged China, Communism, Made in China, Mao, Obama, Trade, United Socialist States of America.

Although the U.S. Senate gave its advice and consent to the ratification of New START, a strategic nuclear arms control...