The Democratic National Committee’s Organizing for America arm — the remnant of the 2008 Obama campaign — is playing an active role in organizing protests against Wisconsin Governor Scott Walker’s attempt to strip most public employees of collective bargaining rights. 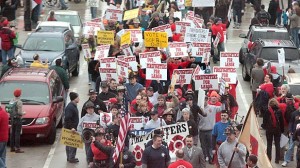 OfA, as the campaign group is known, has been criticized at times for staying out of local issues like same-sex marriage, but it’s riding to the aide of the public sector unions who hoping to persuade some Republican legislators to oppose Walker’s plan. And while Obama may have his difference with teachers unions, OfA’s engagement with the fight — and Obama’s own clear stance against Walker — mean that he’s remaining loyal to key Democratic Party allies at what is, for them, a very dangerous moment.

OfA Wisconsin’s field efforts include filling buses and building turnout for the rallies this week in Madison, organizing 15 rapid response phone banks urging supporters to call their state legislators, and working on planning and producing rallies, a Democratic Party official in Washington said.

The @OFA_WI twitter account has published 54 tweets promoting the rallies, which the group has also plugged on its blog.

“At a time when most folks are still struggling to get back on their feet, Gov. Walker has asked the state legislature to strip public employees of their collective bargaining rights. Under his plan, park rangers, teachers, and prison guards would no longer be able to fight back if the new Republican majority tries to slash their health benefits or pensions,” OfA Wisconsin State Director Dan Grandone wrote supporters in an email. “But that’s not even the most shocking part: The governor has also put the state National Guard on alert in case of ‘labor unrest.’ We can’t — and won’t — let Scott Walker’s heavy-handed tactics scare us. This Tuesday and Wednesday, February 15th and 16th, volunteers will be attending rallies at the state

Gov. Walker won’t even talk to state workers about his proposal to strip them of their rights. He is ignoring Wisconsin voices today and asking for the power to drown them out permanently tomorrow.

We’re ready to do all we can to make sure that doesn’t happen. OFA volunteers are going to fight for our friends with state jobs, our allies in organized labor, and the freedom of all Wisconsinites to organize their communities.

UPDATE: House Speaker John Boehner called on Obama to pull OfA out of the effort:

“I’m disappointed that instead of providing similar leadership from the White House, the president has chosen to attack leaders such as Gov. Walker, who are listening to the people and confronting problems that have been neglected for years at the expense of jobs and economic growth,” Boehner said in a statement. “I urge the president to order the DNC to suspend these tactics.”

A high-ranking aide to Minority Leader Nancy Pelosi (D-Calif.) told Democratic chiefs of staff that a government shutdown is more...