A United Nations report has called on the Mexican government to consider withdrawing the army from the war against the drug cartels. 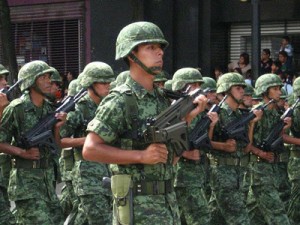 The report slams the army out for its role in the escalating drug violence, noting that the growing number of “disappearances” in Mexico can’t just be attributed to organized crime gangs.

Abuse claims against the National Defense Ministry hit about 1,500 last year, up from fewer than 200 claims in 2006, according to Mexico’s National Human Rights Commission.

Because troops are tried in military courts instead of civil courts for rights abuses, most cases go unpunished, the UN and other groups say. While President Calderón has sent a proposal to Congress that would try cases of torture, rape, and disappearance in civic courts, watchdogs say it is too limited because the Army can easily avoid civil trials by reclassifying torture crimes as abuse while extrajudicial killings at checkpoints are not on the list.

The recommendations follow a UN commission’s investigation of hundreds of disappearance cases in Mexico. Commission members told Reuters that the Mexican government does not acknowledge most of the cases and has so far been uncooperative with their group.

The Mexican government responded Thursday by setting up a national missing persons registry but said it was “obligated” to use armed forces to curb the drug violence. More than 35,000 people have died since President Felipe Calderon first deployed troops to fight the cartels in 2006.

In Case You Missed It:  Boy Saves Video of Teen Girl Saying Racial Slur, Posts It Online to Teach Her ‘a Lesson’
Posted in Freedoms and tagged Mexico, United Nations.

In a recent post arguing that income inequality is a problem, Mr. Mitchell charges that “most American households have seen little gain...