(Politico.com) A prominent libertarian constitutional lawyer and civil libertarian has drafted an article of impeachment against President Obama over his attack on Libya, throwing down a legal gauntlet that could be picked up by some Congressional Republicans. 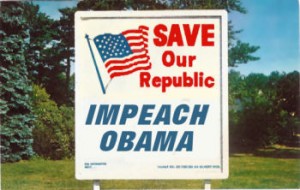 Bruce Fein, a former Reagan administration official in the Department of Justice and chairman of American Freedom Agenda writes in his 15-page argument of Obama’s course that “Barack Hussein Obama has mocked the rule of law, endangered the very existence of the Republic and the liberties of the people, and perpetrated an impeachable high crime and misdemeanor.”

Fein is a small-government conservative who worked on the impeachment of President Bill Clinton and also called for the impeachment of President George W. Bush and Vice President Dick Cheney(highlighted for the tards benefit), and his work doesn’t represent the Republican Party line. But it comes as some Republicans on the Hill, led by Senator Rand Paul, object vociferously to Obama’s decision to strike targets in Libya without Congressional authorization.

In Case You Missed It:  FLASHBACK: FOX 10 Arizona Flashed Katie Hobbs as Gubernatorial Winner 12 Days Before Election — When She Was Behind by 11 Points in Their Own Poll
Posted in Tyranny and tagged Crime, Libya, Obama.

Gaza terrorists continued to pepper southern Israel with rocket attacks on Sunday despite talk of a “ceasefire.” A Kassam rocket...