In 2008, Dutch MP Geert Wilders released the 17-minute documentary Fitna, which demonstrates how the Koran encourages acts of terrorism, anti-Semitism, violence against women, homosexuals and infidels. 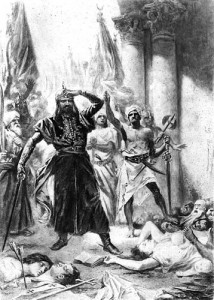 Today, Mr. Wilders announced that next year he will release Fitna 2. The topic of this new documentary will be the figure of the Islamic prophet Muhammad. Mr. Wilders wants to expose the barbaric, murderous behaviour and mental sanity of Muhammad, the man whom one and a half billion Muslims around the world regard as a holy prophet and example to be followed.

With his movie Mr. Wilders wants to express his support for the brave men and women who have left Islam and who, according to Islamic law, deserve the death penalty. “These people are heroes. They deserve our support,” Mr. Wilders says.

Mr. Wilders has already received nemerous death threats for this upcoming video.  What looks like parts of his new movie FITNA II: Muslim Protestors Insult, Threaten Wilders with Death, “we’ll have his head”:.

It’s not every day that a think tank wins an Emmy. But last week on John Stossel’s Fox Business program,...