Breivik described himself as not a religious person and mentions praying only once. His plans leading up to the attacks involved multiple visits to prostitutes. In one section of his manifesto he clarifies what he means by Christian.

Q: Do I have to believe in God or Jesus in order to become a Justiciar Knight? 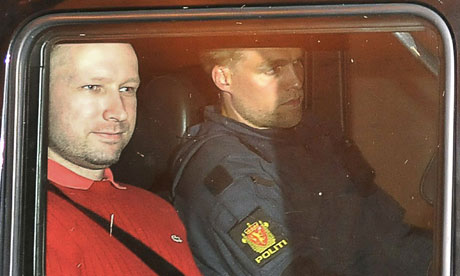 Breivik did call himself a Christian, but meant that in a cultural sense, rather than a theological one. He emphasized that he was not seeking a theocracy, but a secular society. His idea of a Christian Europe had nothing to do with religion.

Breivik viewed Muslims as the enemy, but only domestically. He emphasized that; “Knights Templar do not intend to persecute devout Muslims”

And he contemplated collaborating with them on terrorist attacks against Europe. “An alliance with the Jihadists might prove beneficial to both parties… We both share one common goal.” The Caliphate was a useful enemy for his cause.

In Breivik’s own words, this is how such an arrangement would play out;

“They are asked to provide a biological compound manufactured by Muslim scientists in the Middle East. Hamas and several Jihadi groups have labs and they have the potential to provide such substances. Their problem is finding suitable martyrs who can pass “screenings” in Western Europe. This is where we come in. We will smuggle it in to the EU and distribute it at a target of our choosing. We must give them assurances that we are not to harm any Muslims etc.”

Ask yourself is these are the words of a anti-Jihadist who was fighting against Islam. Or a delusional European terrorist who was willing to ally with Jihadist against his fellow Europeans.

There might come a time when we, the PCCTS, Knights Templar will consider to use or even to work as a proxy for the enemies of our enemies.

Under these circumstances, the PCCTS, Knights Templar will for the future consider working with the enemies of the EU/US hegemony such as Iran (South Korea is unlikely), al-Qaeda, al-Shabaab or the rest of the devout fractions of the Islamic Ummah with the intention for deployment of small nuclear, radiological, biological or chemical weapons in Western European capitals and other high priority locations.

Justiciar Knights and other European Christian martyrs can avoid the scrutiny normally reserved for individuals of Arab descent and we can ensure successful deployment and detonation in the location of our choice.

This should put to rest any idea that Breivik was on a crusade against Islam. He was a deluded man who imagined himself leading a takeover of Europe, even if he had to serve as a Muslim proxy to do it.

Except Breivik didn’t actually kill Muslims. Instead he claimed to be part of a modern Templar Knights organization that was going to take over Europe. Breivik played role playing video games obsessively. One of his favorites was Dragon Age, one of whose characters is a Templar Knight who hacks his way to power.

Did the game inspire Breivik to become a modern Templar Knight? As much as Catcher in the Rye inspired the murder of John Lennon.

Breivik was manic depressive and using steroids while obsessively acting out power fantasies. He built up a fantasy world that convinced him he could become, “…a hero of Europe… A perfect example which should be copied, applauded and celebrated. The Perfect Knight I have always strived to be.”

Trying to apply rational standards to Breivik is futile. Like many killers he was of above average intelligence, but below average sanity. Remove the politics, and Breivik fits the profile of most spree killers. He was angry at society, a loner, suffered from mental problems, abused drugs (in his case steroids) and acted out violent scenarios in violent video games.

Breivik was in favor of allying with Israel, India and other minorities in the Muslim world as part of the struggle against Islam. The idea that he was a Zionist or felt any particular affinity for Israel is baseless. Rather Breivik describes the majority of German Jews as disloyal and suggests that if Hitler had deported them, instead of exterminating them he would have become a hero.

If the NSDAP had been isolationistic instead of imperialistic (expansionist) and just deported the Jews (to a liberated and Muslim free Zion) instead of massacring them, the anti-European hate ideology known as multiculturalism would have never been institutionalized in Western Europe

Breivik does mention that large numbers of Jews would have to be executed as Class A or Class B traitors, but urges targeting by political belief, rather than by race.

5. Anders Behring Breivik was a Moderate

Breivik pretended to be a moderate for tactical reasons. He explored National Socialism and formulated his own plan under another name. In his social networking, he describes, “sharing “moderate” resources from my book on debate groups to coach fellow cultural conservatives”. The quotation marks around moderate is in the original.

While most have swallowed the idea that Breivik was a counterjihadist, his actual plan was to exploit tensions over Muslim terrorism, in order to conduct a campaign of terrorism against European targets and seize power with a more stable version of National Socialism.

Breivik was not a Nazi himself, for tactical reasons, because he disagreed with Nazi expansionism. But his own plan called for the use of WMD’s in Europe and the mass murder of hundreds of thousands of traitors. The echoes of the Turner Diaries are very obviously present in his manifesto.

Breivik was not a member of a terrorist group, except in his own fantasies. His plan was to carry out an attack and become the hero of Europe. This is fairly typical lunacy. His plans were grandiose and detached from reality.

His main target was a children’s camp, his final notes are frenzied and he mentions having his thinking clouded by steroid withdrawal.

Breivik did have a plan, but it is detached enough from reality that it can hardly be called a serious political program. He did succeed in killing a large number of people, but so have many other lunatics. Nothing that Breivik did was the work of a sound mind.

Comparisons have been made to the Unabomber, but the Columbine killers and numerous others also come to mind. Including Charles Manson. Breivik’s program was just as grandiose as Manson’s, and just as deluded. Both hoped that a serious of violent acts would touch off a larger war that would enable them to take over.

Breivik is as much a political terrorist as Manson, and can no more be considered part of any larger cause, beyond the malformed chemicals in his own brain. (SOURCE)

The First Conservatives: The Constitutional Challenge to Progressivism

Modern conservatives look to a variety of historical figures for guidance as they confront progressive liberalism.  Some are from the...