Greece’s prime minister George Papandreou is in the doghouse only because he dared to offer voters a choice.

Shall I tell you the truly terrifying thing about the EU? It’s not the absence of democracy in Brussels, or the ease with which Eurocrats swat aside referendum results. It’s the way in which the internal democracy of the member states is subverted in order to sustain the requirements of membership. 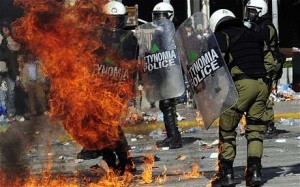 George Papandreou, the luckless Greek leader, is the latest politician to find himself being chewed up because he stands in the way of the Brussels machine. On Monday afternoon, Papandreou announced a referendum on whether to accept the EU’s bail-out terms. He had evidently had enough of the antics of the opposition party, New Democracy, which kept insisting that Greece remain in the euro, while opposing all the austerity measures necessary to that end – an outrageous stance given that New Democracy ran up the deficit in the first place. Papandreou hoped to force his opponents off the fence: in favour of the spending cuts or against euro membership. Perhaps he also hoped to put pressure on the EU to offer more generous terms.

I wish I could convey the sheer horror that his proposal provoked in Brussels. The first rule of the Eurocracy is “no referendums”. Brussels functionaries believe that their work is too important to be subject to the prejudices of hoi polloi (for once, the Greek phrase seems apposite). Referendums are always seen as irresponsible; but, at a time when the euro is teetering on the brink, Papandreou’s proposal was seen as an act of ingratitude bordering on treason.

Across the palaces and chanceries of the continent, Euro-elites closed ranks. Nicolas Sarkozy’s spokesman described Papandreou’s announcement to give Greek citizens the right to vote on their own future as “irrational and dangerous”, Angela Merkel’s called it “irritating”, Silvio Berlusconi’s “negative”. Such phrases, in the mouths of government officials, suggest purple, choking rage.

The Athens establishment lined up with them. Antonis Samaras, the leader of New Democracy, vowed – with splendid disregard for his party’s name – to prevent a referendum “at all costs”. Constantine Michalos, the president of the Athens Chamber of Commerce, called the proposal “an act of political blackmail”. All these insults were provoked by the suggestion that people be allowed to determine their future through the ballot box.

The offices of French satirical weekly Charlie Hebdo has been firebombed by a Molotov cocktail by Muslims, a day after...