According to reports from the Free Syria Army, the Syrian military has moved forces stationed in the southern part of the Syrian Golan Heights closer to Israel. 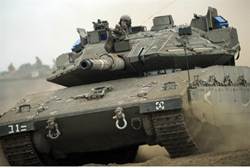 The Syrian military did not come close to the border with Israel. However, armored forces that were stationed along the Syria-Jordan border, which were recently reinforced, were moved and are now closer to Israel, according to the report.

The Free Syria Army is the largest opposition group in Syria and is partly made up of defectors from the official Syrian Army.

Israel has been concerned that Syrian strongman Bashar al-Assad, whose regime is on the verge of collapse, may try to defuse the uprising against him by starting a conflict with Israel.

A Lebanese newspaper, The People’s Army, claimed Thursday in its news website that the IDF has been making an extra effort in the past few days to place landmines all along its border with Syria.

Hundreds of Israeli soldiers are reportedly working at lining the border with mines. Israel had already placed mines along some stretches of the border with Syria after the Nakba Day events last year, in which hundreds of Syrians broke into Israel virtually unimpeded. The action had been orchestrated by the Syrian government, later reports showed.

When is murder not murder? According to the BBC, when Jews or Israelis are the victims. In a feature on...