The writer, an Italian journalist with Il Foglio, writes a weekly column for Arutz Sheva. He is the author of the book “A New Shoah”, that researched the personal stories of Israel’s terror victims, published by Encounter. 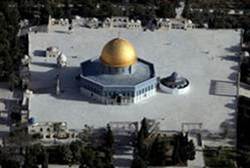 For centuries, Jews have remembered the destruction of their holy Temple by crushing a glass at weddings or leaving unpainted a patch of wall in their homes.

Rabbi Isaac Levy, of the Har Etzion hesder yeshiva and an Israeli rabbinic  expert on the Temple Mount, has told Arutz Sheva that a detailed report on the situation at the Temple Mount in Jerusalem, written by Israel’s ombudsman, has been kept under wraps at the request of Israel’s police department. The report was researched and written at the urgent request of the Committee for the Prevention of Temple Mount Antiquities’ Destruction, a group of archaeologists and scholars concerned about wanton excavations at the site.

The police claim, Rabbi Levy was told by the committee’s lawyer, that  its publication might cause rioting and be a danger to the public order.

The Hebrew language daily, Yediot Aharonot, recently exposed the existence of the report, stating what Arutz Sheva has reported repeatedly, that Israel’s  “valuable remnants from the two Jewish Temples were thrown away to an improvised garbage dump by members of the Waqf (the administrative Muslim body in charge of Temple Mount)”.

A look at what has occurred reveals the ongoing failure of Israeli authorities in safeguarding the archeological treasures found on Temple Mount, Judaism’s most holy site.

In fact, the Waqf is still consistently erasing any trace of Jewish history at the site. Some Islamic scholars claim there is none to begin with.

We can add more reflections on this catastrophe, accompanied by news reports that Mahmoud Abbas is complaining mendaciously that Israel is trying to erase Arab history in ancient Jerusalem, an example of how attacking serves as a transgressor’s best mode of defense .

The Palestinian moves in the last ten years radically changed the status quo on the Temple Mount, but the Israeli government chose to give the work its post facto approval.

Most of the damage was done to the underground space which the Crusaders had termed “Solomon’s Stables”. Israeli authorities did not negate the Wakf’s proposal to convert the “stables”into an Islamic praying area, called “massalam”. An underground chamber with two pillars and an arch from the Second Temple period has already been turned into a mosque, said Rabbi Levy, and the rumors of plans to unify the mosques so as to cover the entire outdoor area are true.

Instead of displaying elementary pride, Israel preferred to look away in shame, and hope for the best.

The authorities bowed to the Wakf’s desire to create an emergency exit, only to find that the Islamic body had punched through the outside wall of the Temple Mount. It was the most massive movement of earth on the Temple Mount in recent times.

Remnants of the archeological record have been fished from the Kidron Valley stream bed where the Wakf dumped the earth it removed from the Temple Mount. Instead of working its way down through the site under the close supervision of Israeli archaeologists, the Wakf sent in bulldozers and then trucks to remove the earth by the ton-load.

The Romans reduced the temple to rubble to erase any trace of the troublesome Jews, and may have built a pagan temple of their own on the site. In Byzantine times,the area housed a church; the Arabs built their own holy sites on top of those of their defeated enemy. And they now want to finish the job by erasing any trace of earlier Jewish life.

Much of the damage cannot be reversed. The Wakf destroyed stonework done by Jews 2,000 years ago in the underground “double passageway”.

Three tractors of different sizes and capabilities have been permanently kept by the Wakf on the compound. If the Israeli authorities won’t rush to protect the area that held the “holy of holies”, the site will meet the same fate as the synagogues in Jericho and Gush Katif.

The Waqf is spreading the same lie about the Temple Mount.

Twelve years ago, on October 7, 2000, Arabs armed with pick-axes and hammers attacked Joseph’s tomb, Judaism’s fourth holy site, smashing the stone structure and ripping it apart, brick by brick. They burned Jewish books and religious articles and subsequently began to attempt transforming the site into a mosque.

The same holds true of the Temple Mount in Jerusalem, where Israeli governments have failed to stand up to wanton Palestinian acts of desecration. It’s the greatest crime of all – a religious and cultural crime of historic proportions.

UNESCO cried when the Taliban bombed the two Buddhas in Bamyan. But this time the UN didn’t say a thing.

In Jerusalem, the Arabs are committing an archaeological crime intolerable to any cultured person, regardless of his political identity. Let’s call it archeological Holocaust.

This article is republished courtesy of HonestReporting Canada. We are proud to share this success of our Canadian affiliate with...