US President Barack Obama signed his name to H.R. 347 on Thursday, officially making it a federal offense to cause a disturbance at certain political events — essentially criminalizing protest in the States.

We broke the news last month that H.R. 347, the Federal Restricted Buildings and Grounds Improvement Act of 2011, had overwhelmingly passed the US House of Representatives after only three lawmakers voted against it. On Thursday this week, President Obama inked his name to the legislation and authorized the government to start enforcing a law that has many Americans concerned over how the bill could bury the rights to assemble and protest as guaranteed in the US Constitution.

Under H.R. 347, which has more commonly been labeled the Trespass Bill by Congress, knowingly entering a restricted area that is under the jurisdiction of Secret Service protection can garner an arrest. The law is actually only a slight change to earlier legislation that made it an offense to knowingly and willfully commit such a crime. Under the Trespass Bill’s latest language chance, however, someone could end up in law enforcement custody for entering an area that they don’t realize is Secret Service protected and “engages in disorderly or disruptive conduct” or “impede[s] or disrupt[s] the orderly conduct of Government business or official functions.”

The Secret Service serves as the police that protects not just current and former American presidents, but are also dispatched to monitor special events of national significance, a category with a broad cast of qualifiers. In the past, sporting events, state funerals, inaugural addresses and NATO and G-8 Summits have been designated as such by the US Department of Homeland Security, the division that decides when and where the Secret Service are needed outside of their normal coverage.

Mara Verheyden-Hilliard of the Partnership for Civil Justice Fund tells the International Business Times that the Trespass Bill in its current form “means it’s easier to prosecute under ‘knowingly,’” instead of both knowingly and willfully, “which is an issue because someone could knowingly enter a restricted but not necessarily realize they are committing a crime.” Speaking with IB Times, Verheyden-Hilliard tries to lay to rest claims that the Constitution will be crippled by the Trespass Bill, but acknowledges that it does indeed allow law enforcement to have added incentive to arrest protesters who could be causing a disturbance. 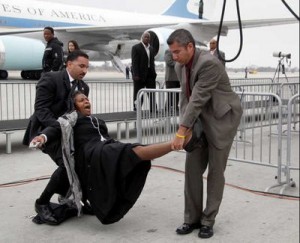 “[HR 347] has been described as a death knell for the First Amendment, but that isn’t supported by the facts,” Verheyden-Hilliard adds. “This has always been a bad law.”

Gabe Rottman of the American Civil Liberties Union adds to IB Times, “Bottom line, it doesn’t create any new violations of the law.” So far, however, it has raised awareness of the levels that the US government are willing to go to in order to make it harder to express ones’ self.

Under the act, protesting in areas covered by Secret Service could land a demonstrator behind bars, and the thing about the Secret Service (in case you couldn’t tell by their name), is that they don’t always make it clear where they are. You could even say that the service they provide, at times, is kept secret.

Presidential hopefuls Newt Gingrich, Mitt Romney and Rick Santorum are now officially covered under Secret Service protection, making it a federal offense to disrupt a campaign stop. That means whether it’s by way of a glitter bomb protest or causing a disturbance on the same Holiday Inn hotel floor that Santorum is staying in, doing such could cause a bit of a legal battle for the persons involved.

Although the G-8 Summit originally scheduled for Chicago this spring would have made much of the Windy City a protected area where crimes could easily be tacked on to arrested protesters, the event was moved this week to the presidential retreat at Camp David. In turn, many have suggested that the White House is only going out of their way to limit protesting rights. While a Chicago summit would have meant the Trespass Bill could have been enforced in the same area where thousands of demonstrators were expected to protest, moving the event to a heavily fortified rural location will instead deter protesters from likely coming close atto the meeting at all.

Do not forget, the president can now detain you for getting too close to his front yard, order your assassination if the country considers you a threat and lock you away for life with no charge if you’re alleged to be a terrorist. You, on the other hand, can’t yell obscenities at Newt Gingrich without risking arrest, talk about freedom of speech.

In Case You Missed It:  Unedited Screengrab from Video of Pro-Abortion Protesters Outside John Roberts’ Home Appears to Show Demon in the Crowd
Posted in Tyranny and tagged Crime, Obama, US Citizen.