Azzam Azzam has issued an emotional appeal for the release of Jonathan Pollard, a Jewish American sentenced to life in prison for passing classified information to Israel. “I do not want to think about the possibility that Jonathan will not be freed, and will keep rotting in jail,” he said. 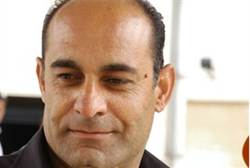 He joined those calling on President Shimon Peres to refuse to accept a “Freedom Medallion” award from United States President Barack Obama while Pollard remains in prison.

“It chills me to think of how I would feel if something like that happened in Egypt while I was still imprisoned,” he said. Azzam was jailed by Egypt for eight years on charges of spying for Israel, charges which he denies to this day.

He concluded his plea for Pollard’s freedom by saying, “We cannot wait for him to die there, in jail.”

More than 24,000 people have signed a petition calling on Peres not to accept the Freedom Medallion unless Pollard is released. On Saturday night, the heads of the National Youth Council announced that they would join the cause.

“Israeli students will send a clear message – there cannot be a Freedom Medallion without freedom,” they said. “We do not learn about justice and morality in order to put those values in storage.”

Peres has responded to the petition by reiterating his commitment to obtaining Pollard’s release. “In meetings with President Obama and the heads of the U.S. government I have raised the explicit request for Pollard’s release and will continue to work this way during my meeting with Obama in June,” he said.

United States Representative Michele Bachman (R-Minn.), a long-time friend of the state of Israel, issued the following Passover greeting to...