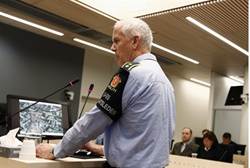 One witness described the 22 July 2011 scene where eight people were killed in a bombing in Oslo as a “war zone.”

Forensic experts explained that massive injuries sustained by four of the eight victims were a result of their proximity to the 2,100-pound fertilizer bomb Breivik had parked in a white van outside a government building.

Breivik – who testified last week that he gave up on building three bombs due to the difficulty involved – has said he was disappointed when he learned the 17-storey building he planted the bomb in front of had not collapsed.

Norwegian Defense Minister Svein Olav Christensen told the court the bomb would have had to have been “much longer” to bring down the structure.

Breivik admits to the bombing and a subsequent shooting massacre at a Labor Party youth camp that left 69 people dead, most of them teenagers.

He testified on Friday that he initially spared one boy because he looked “right-wing,” but later came back and shot him in the shoulder.

“More than 100 body parts were found in the government district,” Ole Morten Stoerseth, a police official tasked with identifying the blast victims, told the court.

Pictures of the victims’ injuries were not shown in court – many of the victim’s relatives were seated in the gallery – but distributed to the judges, prosecutors and defense lawyers.

Breivik claims the attacks were “necessary” and that the victims had betrayed Norway by embracing multiculturalism and immigration. At one point in his testimony early last week he broke down crying and said “my country is dying.”

The self-described anti-Muslim militant, whose trial is now in its seventh day, remained mostly expressionless during the hearing on Tuesday.

However, he smiled when a security guard, who was inside the government high-rise when the bomb exploded, called Breivik’s motive for the attacks “totally absurd.”

Whether or not Breivik is criminally insane or culpable for his acts is the central point of contention between the defense and prosecution.

Police operations leader Thor Langly said the initial reports he received in the confused moments after the attack suggested there were two suspects, and two other bombs about to explode.

Langli recalled that he was standing next to the head of an anti-terror squad in Oslo when he received a call about the second attack at the Labor Party’s youth camp on Utoya, some 25 miles away from the capital.

“I saw on his face that it was something serious,” Langli said. “And while I was watching him he said out of the corner of his mouth, ‘Shooting on Utoya.'”

For his part, the self-described anti-Muslim militant testified last Thursday that he had expected to be shot by police after the bombing. “I estimated the chances of survival as less than 5 percent,” he said.

Langly told the court that when he learned about the Utoya shooting, he started thinking the bomb and the massacre were the actions of the same person.

“I thought there was a connection. But I didn’t have any evidence for that,” Langli said. Turning to Breivik, he added: “I could not imagine there being two people with so many crazy ideas.”

If found criminally insane Breivik would face indefinite incarceration until such time as psychiatrists determined he was “mentally well.”

Such an outcome would also allow officials in Norway to more easily dismiss Breivik’s radical right-wing ideology as the ravings of a madman.

Otherwise, Breivik, who is fighting to prove he is sane and culpable for his actions, faces up to 21 years in prison or an alternative custody agreement until he is no longer deemed a threat to society.

Breivik, who has called such a sentence “pathetic,” says the only acceptable outcomes are acquittal or execution.

In Case You Missed It:  DoD data show that 60% of "covid" hospitalizations in 65 and older patients are "fully vaccinated"
Posted in Freedoms, Terrorism and tagged Crime, Freedom, Islam, Jihad, Liberalism, Muslims, Norway, Terrorism.

Media Gets Dirty Down Under – Part 1