Turkey has issued an indictment in absentia against four Israeli military commanders over a 2010 Gaza flotilla incident in which nine terror activists were killed on a Turkish-sponsored vessel. 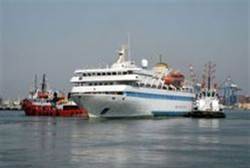 According to a report published Wednesday in the Turkish newspaper Sabah, the 144-page indictment seeks life imprisonment for the four commanders. It was prepared following alleged testimony from 490 passengers who participated in the illegal flotilla, and relatives of the terrorists who died after attacking the Israeli commandos.

Israel operates a maritime blockade on Gaza in order to prevent terrorists from entering the region, and stop them from smuggling in weapons and other ordnance.

The activists were told numerous times they could dock at Ashdod port and transport their goods legally through the land crossing at Kerem Shalom, but they refused.

Instead, they refused to change course when directed to do so by Israeli navy officials, who then sent commandos to board the vessels when they tghreatened to violate Israel’s maritime boundaries at Gaza.

Upon boarding the Mavi Marmara, the commandos — armed only with paintball guns and pistols — were viciously attacked by armed terrorists brandishing iron bars, knives and other weapons. One of the Israeli soldiers was left in critical condition, and a number of others were seriously wounded. Nine of the terror activists died in the clash. All of them were Turkish citizens, including one was a native American.

After the incident, Turkey demanded a formal apology from Israel and when Israel refused, expelled Jerusalem’s ambassador from Ankara. Diplomatic ties were severely downgraded, and have remained impaired ever since.

Truth About the Cult of Islam

Despite daily news of atrocities, our leaders are always keen to stress that Islam means peace or is it pieces?,...