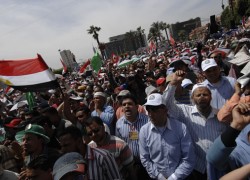 Many around the world have been quick to tout the Arab Spring, with its deposition of tyrants and the occurrence of elections, as democracy in action for parts of the Middle East.

But in places like Egypt, civilian rule and fair elections appear more and more likely not to happen any time soon.

On Thursday, Egypt’s Supreme Constitutional Court that includes Mubarak appointees ruled to dissolve the Islamist-led parliament. The Supreme Council of the Armed Forces (the current governing regime) has now declared that it has full authority and will announce a 100-person assembly to draft Egypt’s new constitution.

And to top it off, the choice Egyptians have in the runoff election for president this weekend is between a former member of the Mubarak regime, Ahmed Shafik, and a representative of the Islamist Muslim Brotherhood, Mohamed Morsi.

With no constitution, no parliament, and two power-hungry candidates, Egypt is faltering on its course to establishing a true democracy.

Writing in The Washington Times, Heritage’s Kim Holmes explains that at best, Egypt is “pre-democratic,” and that there must be commitments to political pluralism and revolving power for it to advance to true democracy. “When out of power,” he says, “a party must see itself as the loyal opposition—loyal not exclusively to its party base, but to the democratic system. No ‘higher’ commitments to religious sectarianism, race, ethnicity, or even nationalism should ever trump a party’s commitment to democracy itself.”

In order for true democracy to flourish, the people and prospective leaders must be committed to the principles of a democratic society, such as political and economic freedoms, rather than simply embracing the process.

Michael C. Cunningham is currently a member of the Young Leaders Program at The Heritage Foundation. For more information on interning at Heritage, please visit: http://www.heritage.org/about/departments/ylp.cfm

In Case You Missed It:  Biden as He Gets ‘Updated’ Covid Booster: “Almost Everyone Who Will Die From Covid This Year Will Not Be Up To Date on Their Shots” (VIDEO)
Posted in Terrorism and tagged Egypt, Election, Foundry, Freedom, Governments, Islam, Jihad, Muslim Brotherhood, Muslims, Obama, Riots, Terrorism, United Socialist States of America.

China Wants To Own Rights To Mine The Moon

Although treaties forbid ownership, the powerful nation would have little resistance when laying claim to lunar resources. Within about 15...